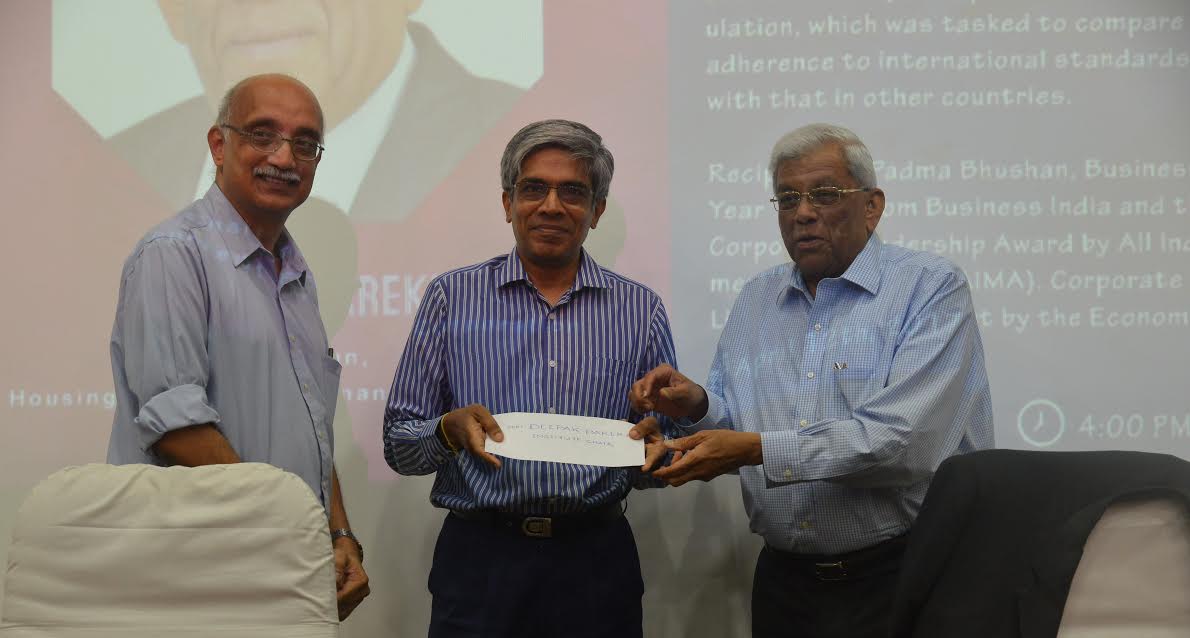 So far, 15 professors have been named as Institute Chairs, and 11 of these have been sponsored by donors. The Chairs are named by IIT Madras in consultation with donor. The first occupant of Deepak Parekh Institute Chair will be Prof. T. Pradeep, Department of Chemistry, IIT Madras.

Launching the Institute Chair, Mr. Deepak Parekh said that while IIT Madras had produced many outstanding scholars, what distinguished it was its strong research orientation, close collaboration with the industry and its start-up ecosystem. “One can only wish there were more such high calibre institutions in India.”

While an estimated 1.5 million engineers were released into the job market annually, he pointed that four-fifths of them are considered unemployable, despite having over 3,300 approved engineering colleges in the country.

“Education needs to be a dual balance of classroom instruction and practical or vocational training. Given our rapidly changing world, it is the teachers who first need ‘up skilling’ and training so they in turn can teach a curriculum that is relevant to the times,” he stated.

The Chair is named after Mr. Deepak Parekh who apart from being the Chairman of Housing Development Finance Corporate (HDFC) was also appointed by the Reserve Bank of India as the Chairman of the Advisory Group for Securities Market Regulation, which was tasked to compare the level of adherence to international standards in India with that in other countries. He is a recipient of Padma Bhushan, Businessman of the Year 1996 from Business India and JRD Tata Corporate Leadership Award by All India Management Association (AIMA). He was awarded with Lifetime Achievement Award by The Economic Times. Under the stewardship of Mr Parekh, HDFC Group took stake in CAMS, India’s premier Mutual Fund service provider, and helped in institutionalizing the brand.

Speaking on the occasion, Prof. Bhaskar Ramamurthi, Director, IIT Madras, said that all the faculty who have been chosen for the Institute Chairs have made outstanding contributions nationally and internationally. “They are the crown jewels of the Institute.”

Speaking on the occasion, Prof. R. Nagarajan, Dean, International and Alumni Relations, lauded the significant role played by donors in the development of the institute. “They are key partners in our successful execution of IIT Madras’ Strategic Plan 2020,” he stated. The Strategic Plan 2020 can downloaded from https://www.iitm.ac.in/sites/default/files/uploads/strategicplan2020.pdf

Introducing Prof. Pradeep, the Head of Department of Chemistry, Prof.Indrapal Singh Aidhen, said that the licensing fees and royalties from Prof. Pradeep’s works had brought the IIT Madras nearly Rs. 4 crore. “Prof. Pradeep has been a champion for nanoscience and nanotechnology, and his pursuits have enabled solutions to the important issue of water purification in several Indian states.”
The Department of Chemistry at IIT Madras is very active in research and in development of good human resources, with 35 faculty and 270 Ph.D. scholars and 108 M.Sc. students on its ranks, said Prof. Aidhen.

In a video message, Prof. Pradeep said that matter behaved differently at the nanoscale level and some of those properties were useful for every applications of relevance to society. “I focused on water and in the course of that exploration, several new things came out. Some of those were taken to the people in the form of products.”

While people in several parts of the country had benefitted, he said that “much much more work is needed to take the benefits of nanoscale materials to other aspects of water and environment in general.” He also thanked the donor and Mr. Deepak Parekh, and said that he was pleased to be associated with this Chair.