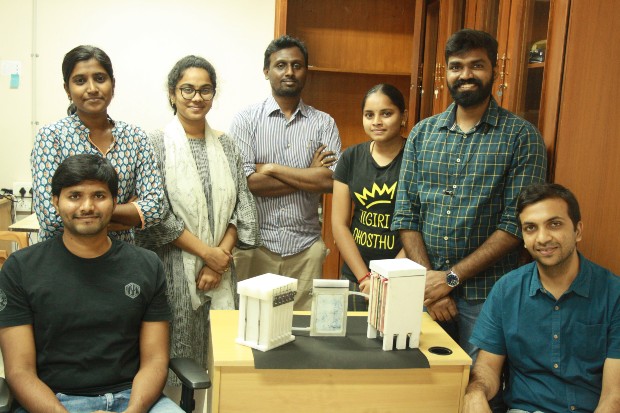 The team is working on developing Zinc-Air batteries, which can become an affordable and easily available alternative to Lithium-Ion batteries currently used in EVs

CHENNAI : Indian Institute of Technology Madras Researchers are developing mechanically-rechargeable zinc-air batteries as an alternative to Lithium-ion batteries which are used in Electric Vehicles.

The Researchers, who have filed for patents for this new battery technology, are collaborating with major industries to develop these zinc-air batteries. They are economical compared with existing lithium-ion batteries and have a longer shelf life.  Zinc-air batteries can be used in two-wheeler and three-wheeler EVs.

The Indian Electric Vehicle sector has been growing rapidly in recent years following the Government of India’s favourable policies and the increasing call to reduce pollution.

Dr. Aravind Kumar Chandiran, Assistant Professor, Department of Chemical Engineering, IIT Madras, and his research group have been working towards developing a cost-effective alternative to Lithium-ion batteries. They focused on Zinc-Air Batteries as Zinc is a widely-available resource.

Highlighting the key focus of their research, Dr. Aravind Kumar Chandiran, Assistant Professor, Department of Chemical Engineering, IIT Madras, said, “Our Research Group is developing a futuristic model for zinc-air batteries for EVs. Through this research, we are also identifying shortcomings in existing technology and finding ways to address them. The Research team has currently developed zinc-air cells and is working towards developing zinc-air packs for EVs.”

The Researchers are mooting separate ‘Zinc Recharge Stations’, similar to petrol stations. The EVs Users utilising zinc-air batteries can reach out to these bunks whenever the batteries are drained, similar   to the current model of conventional vehicles refuelling at petrol stations.

IIT Kanpur develops haptic smart watch for the blind and the…

The Researchers are also mooting to recharge the used ‘zinc cassettes’ through solar panels.

Speaking on the significance of the project, Mr. Akhil Kongara, a Research Scholar, IIT Madras, said, “According to the proposed plan, a EV user will only have to spend a few minutes at the ‘zinc recharge stations’ to swap ‘zinc cassettes’.”

Mr. Gunjan Kapadia, another Research Scholar working on the zinc-air batteries and lithium-ion batteries operational safety at IT Madras, said, “The indigenously developed zinc-air batteries, specifically in an Indian context, are extremely safe as it has aqueous electrolyte and it doesn’t catch fire even in worst case scenario of EVs accident“

Advantages of zinc-air batteries include:

⮚        Zinc-air batteries are also water-based and have a longer shelf life.

Aalto University: The participatory budgeting project culminated in a…

IIM Kozhikode Launches the 9th Batch of the Senior Management…