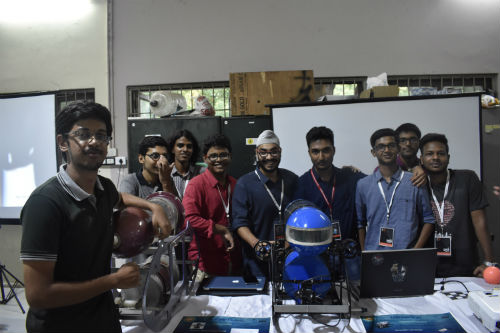 Chennai: Indian Institute of Technology Madras students demonstrated some of the projects that had won international acclaim in recent years during the CFI Open House event today, 8th October 2017.

The Centre For Innovation (or) CFI is a ‘student-run lab that remains open 24X 7. It was established in 2008 with a vision to encourage engineers to apply knowledge from their academic pursuits to ‘innovate’ and propose solutions to real-world problems.

The CFI Open House is an annual event showcasing the recent work and achievements of our student innovators, as well as providing an opportunity for their projects to be displayed on a large scale, leading to implementation.

Speaking about CFI, Prof. Bhaskar Ramamurthi, Director, IIT Madras, who inaugurated the Open House, said, “The Centre For Innovation at IIT Madras is the student-run tinkering lab that is now nearly a decade old and a model for similar labs across institutes in the country. Student groups have won several prizes in international competitions and many a startup has emerged from the projects undertaken here.”

Indeed, he added, the motto of CFI is “Walk in with an idea and walk out with a product”. This year, too, there are a number of award-winning projects on display, as well as innovative products ripe for launch by startups. The projects on display this year include the stellar efforts of students at the fledgling IITs at Tirupati and Palghat, which are being mentored by IIT Madras”, said Prof. Bhaskar Ramamurthi.

Prof B. Ravindran, Faculty-in-Charge, CFI, IIT Madras, said, “The Centre For Innovation has become an integral part of student life on campus with a vast majority of students undertaking some project at CFI during their tenure here. This serves as an introduction to the vibrant entrepreneurial eco-system in IIT Madras and several successful start-ups have been incubated from projects started at CFI.”

Ø Team Anveshak’s Mars Rover, which qualified for the finals of the University Rover Challenge and was demonstrated at the Mars Desert Research Station in Utah Desert, U.S.

Ø Team Raftar’s Formula Race Car, which was completely built from scratch, and is driven by, students of IIT Madras. Team ‘Raftar’ was placed Fifteenth overall and First amongst Non-European teams in the Formula SAE Italy & Formula Electric Italy 2017 organized at Riccardo Paletti Circuit from July 19 to 23, 2017.

Over 40 student projects were demonstrated during the event, including the Railroad Fault-Detection Robot, winner of the James Dyson Award, Intelligent Lighting System: Finalists of the Carbon Zero Challenge, as well as ICSR projects, and CFI mentored projects from IIT Tirupati and IIT Palakkad under our mentorship program, Vistaar.

CFI Open House is an opportunity for students to network with potential mentors and facilitators in the field of technology and entrepreneurship. In the years since its inception, CFI has grown as a hub for innovation, on multiple occasions collaborating with industries and nurturing hundreds of student-proposed projects that have bagged honourable awards, internationally recognised competition teams and some of the nation’s most acknowledged startups.