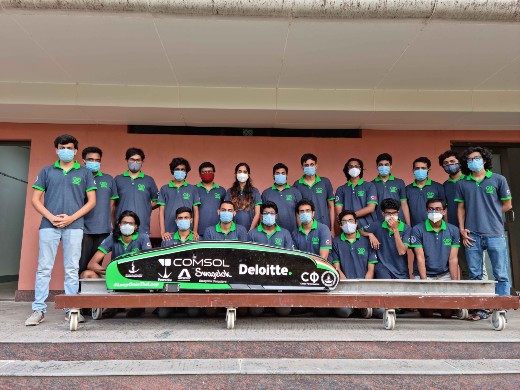 Despite the challenges from pandemic, students collaborated closely from their homes to revamp the pods’ sub-systems with scalable and efficient technologies and manufactured & tested a Hyperloop Pod Prototype

CHENNAI: Indian Institute of Technology Madras’ Team Avishkar Hyperloop has made rapid strides since it became the debut finalist and the only Asian team to qualify for the finals of SpaceX Hyperloop Pod Competition 2019, a global contest organized by SpaceX, the American aerospace manufacturer. It was one of the Top 21 teams out of more than 1,600 teams participating globally in this event.

Despite the challenges from the pandemic and the lockdowns, the 40 students of Team Avishkar collaborated on this Hyperloop pod development from their homes to completely revamp the pods’ sub-systems with scalable and efficient technologies. In the past few months, they have manufactured a Hyperloop Pod Prototype and tested the novel technology.

The students’ hard work has enabled Team Avishkar Hyperloop to qualify for the European Hyperloop Week, being held in Valencia, Spain, from 19 to 25 July 2021. The team will participate virtually due to the pandemic-related travel restrictions.

A demonstration video of the Hyperloop Pod Developed by Team Avishkar can be downloaded from the following link – https://fromsmash.com/Avishkar-Hyperloop-Pod-Demo

A Video Byte of Team Avishkar explaining the Hyperloop Pod in English Language can be downloaded from the following link – https://fromsmash.com/Avishkar-Video-Bite-English

A Video Byte of Team Avishkar explaining the Hyperloop Pod in Hindi Language can be downloaded from the following link – https://fromsmash.com/Avishkar-Video-Byte-Hindi

A Video Byte of Team Avishkar explaining the Hyperloop Pod in Tamil Language can be downloaded from the following link – https://fromsmash.com/Avishkar-Video-Bite-Tamil

Avishkar Hyperloop is the student team from Centre For Innovation (CFI), IIT Madras, which is working on an indigenous design and development of a self-propelled, completely autonomous Hyperloop Pod in India. The team is working with a vision to develop technologies for future modes of high-speed transportation with applications in various fields including Defence, Logistics and Aerospace Industry, among others.

Hyperloop has been a buzzword in India for the last few years. Several companies have proposed routes like Mumbai-Pune and Chandigarh-Amritsar. After an initial study, Team Avishkar is working on a detailed study of energy, costs, demand and other business aspects for a Hyperloop corridor between Bangalore and Chennai to assess the economic feasibility of Hyperloop in India.

Team Avishkar estimates the travel time between the city pair to reduce to a mere 30-minute ride from the current six hours journey by car or train.

Highlighting the unique aspects of the Pod developed this year, despite the pandemic related challenges, S.R. Chakravarthy, Faculty Advisor, Avishkar Hyperloop, said, “This is an exciting outcome in trying times, where the students have shown their mettle and verve in accomplishing against odds. Nowhere have I seen a student group clock so much IP material on hyperloop in such a short time. It holds great promise for India.”

Hyperloop is the 5th mode of transportation, a high-speed train that travels in a near-vacuum tube. The reduced air resistance allows the capsule inside the tube to reach speeds of more than 1000 km/h. Mr. Elon Musk proposed the idea of Hyperloop to the world in 2013 through a whitepaper – ‘Hyperloop Alpha.’

More than a competition, the European Hyperloop Week is a confluence of student teams, start-ups, and companies working in the Hyperloop domain. It will act as a boiling pot for discussions on the reliability, scalability, and feasibility of this future technology. The competition is being organized by four well-known European student teams in partnership with companies such as Virgin Hyperloop and AECOM.

Deloitte India is supporting Avishkar Hyperloop this year. With its’ vision to support innovation and technologies that drive sustainable societal change, Deloitte India has provided crucial support to the team’s efforts towards the European Hyperloop Week competition.
Highlighting the improvements made in this years’ pod, Mr. Neel Balar, Team Avishkar Lead and Third Year Student, Department of Engineering Design, IIT Madras, said, “Our research has yielded many technological breakthroughs such as the linear induction motor for propulsion, teams’ proprietary levitation technology, and contactless magnetic braking system, among others. Looking beyond the pod, the team is also focusing efforts on the design of the hyperloop infrastructure.”

Elaborating further, Mr. Kishan Thakkar, Team Avishkar Lead and Fourth Year Student, Department of Metallurgical and Materials Engineering, IIT Madras, said, “Creating infrastructure such as tubes and pylons take about 70 per cent of the total budget of a Hyperloop corridor. Our research is focused mainly on reducing the cost of this infrastructure and adapting the Hyperloop to the needs of the Indian subcontinent. The team is truly pushing the frontiers of this technology to bring a sustainable future.”

For the latest third iteration of the design, most systems are based on entirely new and highly efficient technologies. For instance, friction braking requires mechanical contact and causes wear. But now we’ve moved to contactless Eddy Current braking mechanism. The Linear Induction Motor (LIM) and custom inverter for the LIM has been designed by us from scratch to replace the BLDC motors for propulsion.

Insurance That Weathers A Pandemic – Invest In Ulips!