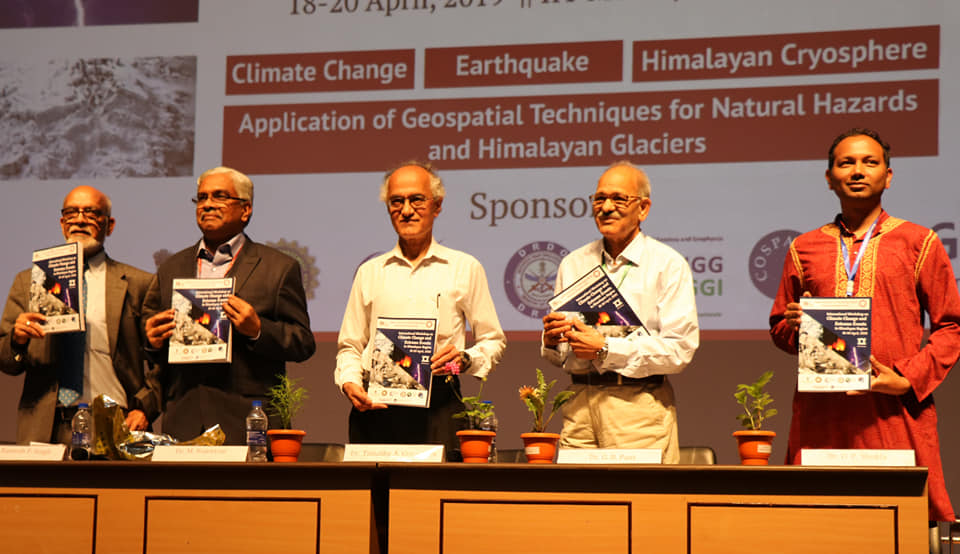 Mandi: Indian Institute of Technology Mandi is hosting an International Workshop on Climate Change and Extreme Events (C2E2) in the Indian Himalayan region from 18th to 20th April 2019, providing a platform to Indian and international scientists to discuss climate change and extreme events.

The workshop is aimed at understanding the effects of climate change, melting of glaciers, increased frequency of extreme events, atmospheric pollution, pollution due to crop residue burning in Himalayan region and applications of remote sensing.

Delivering the Chief Guest’s Address, Dr. M. Rajeevan, Secretary, Ministry of Earth Sciences (MoES), Government of India, said, “Climate is changing and global warming is happening due to release of greenhouse gases. In many parts of the world, including India, the effects of climate change are being seen especially in mountain regions like Mandi.”

Lauding IIT Mandi for hosting a workshop on this topic of vital importance, Dr. Rajeevan said that the Himalayas were one of the world’s sensitive hotspots to climate change along with the Artic Region. The climate change can affect food, water and energy security of the region.

Further, Dr. Rajeevan said, “The Himalayan Region is experiencing increasing variability in weather in last many years. This could lead to further snow accumulation over this region and more research is needed to understand this phenomenon. By studying data, there are also evidences that the number of extreme warm days and nights has increased in this Himalayan Region, which are clear effects of global warming.”

The uncertainties in environment have led to many extreme events such as glacial lake outbursts, earthquakes and rock/landslides, which can be mapped and monitored regularly using satellites. This workshop aims to provide a platform for Scientists, Academicians, Researchers and Scholars from various national and international institutes to gather and share knowledge for the overall goal of working towards capacity building in the field of earth sciences.

The Main themes of this workshop are:

TCS Positioned as a Leader in SAP S/4HANA Services by…

Extreme Weather Events in the Himalayan Region
Himalayan Cryosphere
Climate Change
Application of Satellite Remote Sensing and Geospatial Techniques for Extreme events in the Himalayan Region
Delivering the Presidential Address, Prof Timothy A. Gonsalves, Director, IIT Mandi, said, “We have 15 professors from six different disciplines in IIT Mandi who are working on climate change. This workshop saw the participation of faculty from various disciplines and is an example of the inter-disciplinary and collaborative environment on campus.”

Speaking about the growth of IIT Mandi, Prof Gonsalves said, “The Institute started with 97 students in 2010 and has now grown in 2018 to close to 1,300 students, 104 faculty and nearly 900 alumni, attracting over Rs. 85 crore in funding for research projects. IIT Mandi focuses on areas of regional and national relevance such as technology solutions for the Himalayan Region and adopts an inter-disciplinary culture. IIT Mandi faculty also work on globally competitive research. The IIT Mandi Technology Business Incubator Catalyst has incubated more than 34 startups.”

This workshop aims at providing an insight to practical applications of the remote sensing in the context of long-term plans and procedures for the mitigation of impact of climate change and extreme events in the Indian Himalayan Region.

Speaking about the importance of this workshop, Prof. Ramesh P. Singh, workshop Coordinator and Visiting Faculty, IIT Mandi, said, “We have to understand climate change and its impact as it is very important for future generations. The workshop has participation from all over India, besides Europe, and the U.S. with over 90 speakers from across India. Over 200 abstracts were received with over 150 listed and more than 90 oral and poster presentations during this workshop.”

The C2E2 Workshop was the first event to be held at the newly-completed 800 seater auditorium of IIT Mandi.