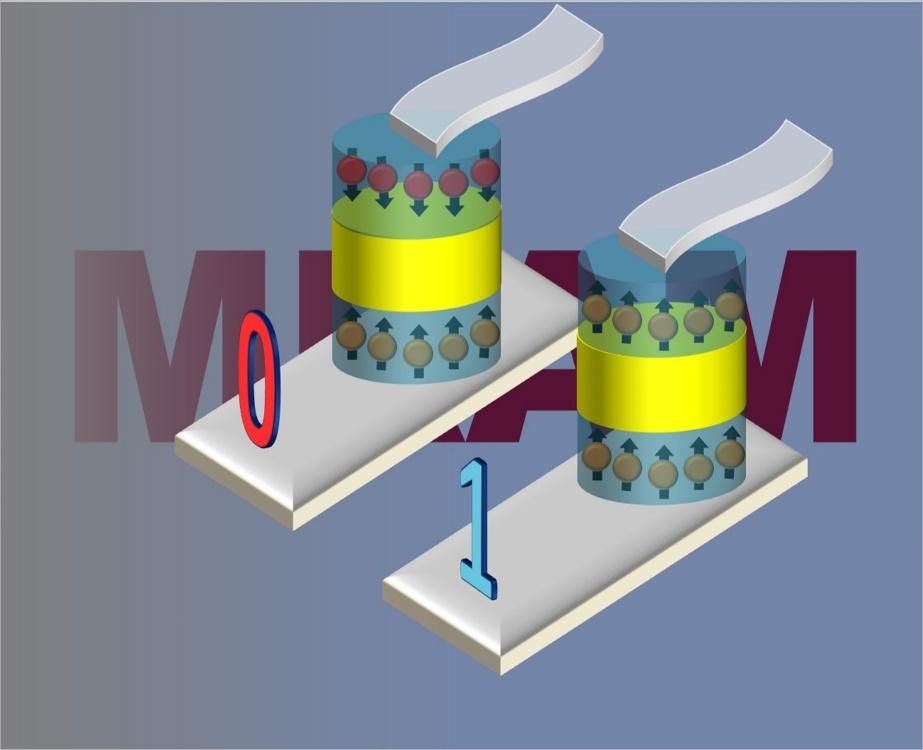 Mandi : Researchers at the Indian Institute of Technology Mandi have demonstrated cutting-edge Magnetic Random-Access Memory (MRAM) technology, with the capability to transform next-generation computers, smartphones and other gadgets leveraging artificial intelligence (AI) and Internet-of-Things (IoT) technology. MRAM is much faster than the current technology and offers unlimited read and write cycles. The expected computer refresh programming time for MRAM based data storage bit may be as low as ~ 2 ns, instead of ~ 50 ns for the familiar DRAM (Dynamic Random-Access Memory) bit.

The team from IIT Mandi recently designed and developed Spin-transfer torque (STT) based nano spintronic devices, which will put an end to computer data loss due to interruptions of power supply. In case of MRAM, the information is not stored in the form of conventional electric charges, but via the magnetic alignment of spins. This leads to an increase in energy efficiency and capability to store more information in smaller volume as compared to the existing DRAM and SRAM (Static Random-Access Memory) technologies.

Devices based on spintronic technology utilise the Spin-transfer torque (STT) mechanism to transmit magnetic spins of electrons to process information, unlike normal electronic devices that are driven by electron charges. These developed nanodevices have been fabricated and tested in the world-class, state-of-the-art facility at the Centre for Design & Fabrication of Electronic Devices (C4DFED) at IIT Mandi.

The results of the recent studies carried out by the IIT Mandi team have been published in the IEE Transaction on Electron Devices, Volume: 67, Jan. 2020; DOI:10.1109/TED.2019.2954131 and ACS Appl. Electron. Mater. 11, 2268-2278, 2019, DOI.org/10.1021/acsaelm.9b00469. The cited publications are co-authored by Dr. Satinder K. Sharma and Dr. Srikant Srinivasan, Associate Professors, School of Computing and Electrical Engineering, IIT Mandi, along with their research scholars Mr. Mohamad G. Moinuddin, Ms. Shivangi Shringi and Mr. Aijaz H. Lone.

“Quest for next-generation high performance and functional electronic circuits has been growing as the artificial intelligence (AI) and Internet-of-Things (IoT) devices started to play a leading role in all walks of human life. It fosters the demands for the development of universal high density and ultrafast memory electronics. Moreover, it must be capable of retaining digital information even when backup source power is not available”. MRAM based AI & IoTs will enable not only diverse electronics, but also impact correlated areas like agriculture, healthcare, education, and skilling, along with transferring economic power of individuals and the country”, says Dr. S.K. Sharma, on the need for research into newer and more efficient technologies, within reach and transferring economic power to the common people.

This need is particularly relevant in modern times as the abundant digital, communication and information devices are expected to generate data volumes requiring 1 trillion hard drives at every instant by 2024. Existing DRAM can’t meet these massive demands of data storage, therefore, a promising alternative for this concern is nanoscale, non-volatile, radiation-hard, low-energy-loss based spin-transfer-torque magnetic random-access memory (STT-MRAM). Indeed, experts in data science predicted that the market demand for memory capacity will outpace production by the end of 2020.

In case of MRAMs information storage in a digital bit “0” or “1” is determined with applied magnetic fields. Spin-transfer torque (STT), allows the bit switching between the parallel (P) and antiparallel (AP) states, which impart their angular momentum to the magnetization of the multilayerr structures. MRAM operates at lesser power, not requiring large, energy-consuming charges to rewrite the chip and is also much faster than counterparts due to the consumption of even lesser power to read. As such, MRAM is a better alternative for those requiring a longer lifetime for data storage and next-generation processing like data center, high-performance computing applications at reduced costs.

This spin-transfer-torque (STT) based magnetic states, promise much better storage capabilities than conventional charge-based RAM. Harnessing, information storage through the spin of electrons, manipulated with the magnetic state leads to torque based angular momentum conservation, is known as Spin-Transfer Torque-Magnetic Random-Access Memory (STT-MRAM). “STT-MRAM devices are non-volatile and have much higher storage densities and endurance than current CMOS based RAM technologies”, says Dr. S.K Sharma. Another advantage of these kinds of memory is that they can be integrated with conventional workhorse silicon, which will surely gear up a huge digital data storage potential for all computers and electronic gadgets

One major hurdle to scaling of spintronics-based RAM has been the high operating current density. In order to overcome this problem, IIT Mandi team has demonstrated the reduction of operating current density in an STT-RAM device that uses iron-enriched Heusler alloy (an alloy made of cobalt, iron and boron) and magnesium oxide. They have introduced nitrogen to prevent the oxidation of the iron.

“Our devices have very low switching current density and free-layer switching duration of less than three nanoseconds (1 nanosecond = 10-9 seconds). This is a very promising start and further optimization will make them candidates for next-generation RAM devices”, says Dr. Srinivasan.

The STT-MRAM is the most studied candidacy for various next-generation electronic devices and major semiconductor foundries are investing in its development. Companies such as IBM, Samsung, Everspin, Toshiba, Avalanche Technologies, Spin Transfer Technologies and Crocus are developing STT-MRAM chips. Recent advances such as those shown by the IIT Mandi team, enables indigenous technology development and commercialization in the cutting-edge area that may be the mainstay of game-changing technology.