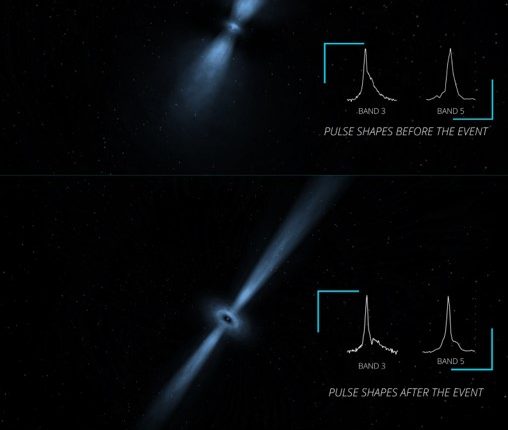 New Delhi : It is a big moment for the Indian Pulsar Timing Array (InPTA) team of astronomers. They detected unprecedented changes in a radio pulsar with the help of a highly versatile, sensitive and upgraded Giant Metrewave Radio Telescope (uGMRT).

The InPTA is a collaboration of Indian and Japanese astronomers from several institutes, including IIT Roorkee. Earlier this year, the InPTA became a part of the International pulsar timing array (IPTA) consortium, an international collaboration aiming to catch the elusive nanohertz gravitational waves.

Pulsars (PULSAting Radio Stars) are one of the fascinating objects in the universe. They are ultra-dense dead stars that act as celestial lighthouses with radio flash once every star’s rotation. This flashing radio signal or pulse has unmatched stability in its period and shape. The stable shape of their pulses is regarded as their fingerprints and is crucial for fine and precise extraction of their clock-like pulse ticks. Measuring these time ticks for a collection of pulsars is necessary for the momentous detection of nanohertz (nHz) gravitational waves.

The InPTA has been regularly monitoring a set of pulsars using the uGMRT for the eventual detection of nanohertz (nHz) gravitational waves. Among the set of pulsars being observed, PSR J1713+0747 is one of the most reliable clocks. Ongoing observations between April and May 2021 and thereafter revealed strong evidence of an altered fingerprint in this star disturbing its rhythm and clock behaviour. The InPTA team continued to observe this pulsar to track the changes following this event. With the low radio frequency observations that only the uGMRT can provide, the team has concluded that the change in this event was much larger than ever observed before in any other pulsar clock used in PTA experiments. As these experiments require exquisitely timed observations, such a change needs to be accounted for to make reliable detection of nanohertz (nHz) gravitational waves. The InPTA team suspects this variation represents a change in the extremely strong and complicated magnetic field structure in the exterior of a pulsar. Further, uGMRT observations are likely to help unravel the mysteries behind this unexpected but interesting event and eventually help detect nanohertz (nHz) gravitational waves.

Professor Ajit K Chaturvedi, Director at the IIT Roorkee, said, “I congratulate the team on their discovery. It is a matter of great pride for us that our students have contributed to this work, utilizing the capabilities of uGMRT. I believe this is an illustration of the opportunities students have in our institute. I hope that the present success in Nuclear Astrophysics will permeate to other disciplines. We look forward to enhancing our participation to other technical aspects of uGMRT.”

Commenting on the development, Mr. Jaikhomba Singha, a PhD student at the IIT Roorkee, said, “This new finding is a significant milestone in our research towards detection of (nHz) nanohertz gravitational waves. I have worked closely with astronomers from various institutes of India and abroad for this project, which gave me great exposure to this exciting field. I am personally thankful to IIT-R for its endless support and for promoting and providing varied research opportunities.”

The results of this project recently got published as letters in monthly notices of the Royal Astronomical Society. The paper had instrumental contributions from two of the institute’s (IIT-R) exceptional students – Mr. Jaikhomba Singha, a PhD student, who is the lead author and Mr. Piyush Marmat (Int. MSc student) of the Department of Physics.

Entrepreneurship Cell, IIT Kanpur to host its flagship event ESummit’21 from 21st to…