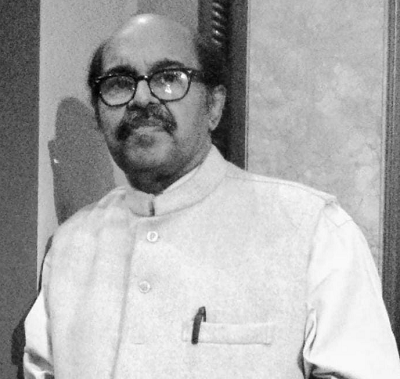 IKS 2022: Mr Bhaskaramenon Krishnakumar shared the saga of the Malayalam language and literature that flourished over centuries

Gandhinagar: In the next set of lectures under the Indian Knowledge Systems (IKS) elective course, participants had a rendezvous with the richness of the Malayalam language and literature. Noted author and poet, Mr Bhaskaramenon Krishnakumar, delivered two online lectures titled ‘Malayalam: Saga of a Language over Centuries’ and ‘Remembering Three Departed Poets’, on February 3 and 4, 2022, respectively.

At the beginning of his first lecture, Mr Bhaskaramenon Krishnakumar touched upon certain essential aspects of Kerala and Malayalam literature, such as its great diversity of themes, iconic works, and eminent authors. He also discussed the uniqueness of the Malayalam language and its commonality with other Indian languages, alongside the variety and mellifluousness of its meters. The talk highlighted how the literature of a small piece of land spoken by a few thousand people flourished over centuries and achieved a preeminent position. Tracing Kerala’s rich geography soaked in mythology, it elaborated on Malayalam’s interesting foreign influences, folk songs, and significant works like the Parasurama legend and the festival of Onam involving the story of King Mahabali. According to most scholars, the earliest literary work in Malayalam is the Ramacharitam, believed to be composed in the 12th century CE. The poem is a collection of over 1800 verses describing the war between Rama and Ravana.

Progressing further, Mr Krishnakumar talked about boats being the primary form of conveyance in this land of rivers. The boat songs may have originated from the humming of the rowers. Over the years, these tunes and rocking rhythms likely became standardised as meters. He also recited various poetry passages to emphasise the linkages between Malayalam’s glorious history and its egalitarian present as people know it. He said, “Eminent poets like Akkitham and Vishnu Narayanan Namboodiri were never “elite,” as the common critique wrongly goes; concern for the downtrodden was central to their poetry; they were ever modern, yet ever old.” Among prose, Malayalam is perhaps the first Indian language with a translation of Kautilya’s Arthashastra.

The second talk by Mr Krishnakumar threw light on the life and literary works of three preeminent Malayalam poets – Akkitham Achyuthan Namboodiri (1926- 2020), Sugatha Kumari (1934 – 2020), and Vishnu Narayanan Namboodiri (1939- 2021), all three of them recipients of Sahitya Akademi awards, apart from many others. He discussed how Akkitham’s creations imbibe abundance, variety, subtlety, limitless compassion for children, the disabled, and the underprivileged. Probably, it was the Calcutta Thesis calling for an armed revolution that turned Akkitham away from Communism and drew him towards contemplation, meditation, and spiritualism. Transitioning to the poet Sugatha, Mr Krishnakumar emphasised that several of her works are themed on inconsolable sorrow, empathising with humanity at large, particularly with victimised children and mentally challenged women. Talking about Vishnu Narayanan Namboodiri, Mr Krishnakumar said that he helped younger poets start avant-garde movements, and was always a dissenter himself – though with rare humility – objecting to Christian or Hindu orthodoxy alike. But he chose to turn back to his Vedic roots, both in his personal life and in drawing the Upanishadic philosophy into his poetry. He read out and explained several parts of these poets’ works. The two sessions concluded with lively Q&A sessions.

Mr Bhaskaramenon Krishnakumar (alias Atmaraman) writes poetry and on poetry. He has published two volumes of poems and four volumes of literary criticism in Malayalam. He has also edited the collected works and English translations of eminent Malayalam poets. His latest book Akkitham: A Pictorial Autobiography (2020), has been brought out by Rupa Publications.

This is the sixth edition of the Introduction to Indian Knowledge Systems elective course, IKS 2022, being held online on the theme ‘Precolonial India’s Treasure House of Literatures’. The course is open to students and anyone interested in India’s knowledge systems and cultural heritage. They can join the course for free by registering online at: http://iks.iitgn.ac.in/. All lectures will be live-streamed on IITGN’s YouTube channel, generally on Thursdays and Fridays from 5:05 to 6 pm. The course’s website will carry regular announcements and updates on the speakers and lectures.

IIT Bhubaneswar successfully organized a one day webinar on the topic “How to Start an Enterprise” on February 5th, 2022