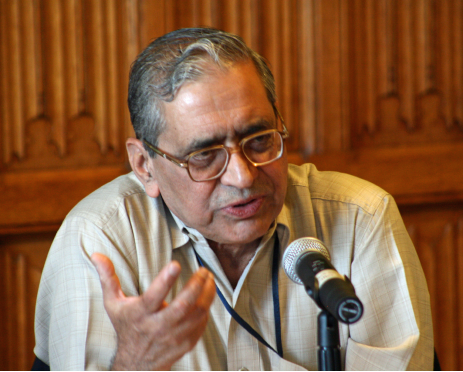 Gandhinagar: The fourth edition of the Indian Knowledge Systems (IKS) semester course by the Indian Institute of Technology Gandhinagar (IITGN) on the theme of The Ancient “Idea of India” is going to conclude this week with two lectures on India’s knowledge traditions.

Prof Kapil Kapoor, well-known expert and academician on India’s intellectual traditions, will deliver the lectures online on July 01 and 02, 2020, from 3:30 to 5 pm, which will also be live-streamed on IITGN’s YouTube channel on this link. The first lecture is titled as “Panorama of India’s Knowledge Traditions”, and the second lecture will be on “Pan-Indianness of India’s Intellectual Traditions”. Rather than being delivered as formal lectures, these two sessions will be in the format of a free-wheeling conversation with Prof Michel Danino, coordinator of the IKS course at IITGN. They will explore the complexity, richness and creativity of India’s knowledge traditions. They will also highlight some of the tallest Indian intellectuals, from Panini to Abhinavagupta and beyond, to provide a sense of the pan-Indianness of those traditions and their contribution in weaving together a vibrant cultural entity from Kashmir to Kanyakumari and from Gujarat to Bengal and Assam.

Prof Kapil Kapoor, who has been teaching for over sixty years, has been one of the pioneering academicians and experts on Indian Knowledge Systems in India. Generations of students have been fascinated by his lucid, invigorating and ever original elucidations, as a speaker and a writer alike, of the most complex concepts of Indian literature, philosophy, aesthetics, languages and textual studies, to which he has dedicated several books and numerous papers. Prof Kapoor taught for decades at JNU, New Delhi, acting for some years as its pro-Vice Chancellor. He has held many positions in various official bodies; recently, he chaired the important MHRD Language Expert Committee for Comprehensive Language Policy for India, whose report is under consideration. He is currently Chairman, Indian Institute of Advanced Study, Shimla.

Earlier last week on June 24 and 25, 2020, IKS course hosted Dr Meenakshi Jain, a noted historian of medieval and colonial India, for two online lectures: 1) “Traditions of Image Worship in Indian civilization”, which traced the origins of image worship and the importance of icons in India’s civilisational heritage, and 2) “Safeguarding Icons and Temples in Indian history: a pan-Indian enterprise”, which focused on the deep reverence for icons across ancient and medieval India and the extraordinary efforts devotees made to safeguard them over the centuries. These lectures will be available shortly on IIT Gandhinagar’s YouTube channel.

Dr Meenakshi Jain spent most of her academic career teaching history at Delhi University and has authored many books on historical materials, issues or periods. Her deeply researched books have dealt with historical issues of national importance. In her recent monumental work, Flight of Deities and Rebirth of Temples (2019), she has collected vast amounts of archival, archaeological, epigraphic and literary material to document the medieval response to temple destruction and image desecration, including the repeated endeavours to reconstruct destroyed temples or safeguard endangered images. Dr Meenakshi Jain was awarded Padma Shri in 2020.