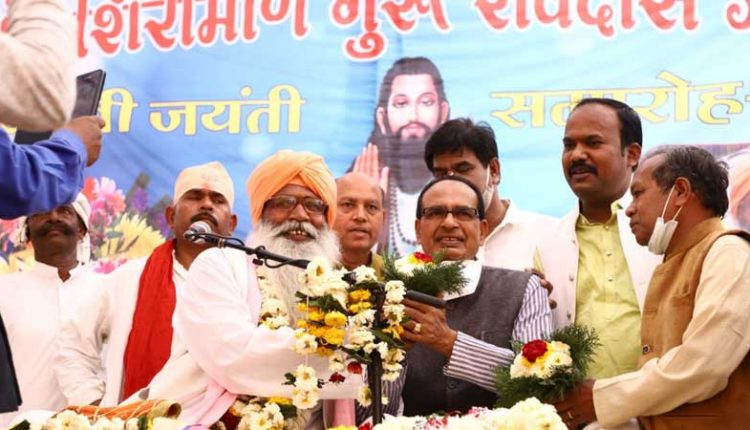 Bhopal : Chief Minister Shri Shivraj Singh Chouhan said that Saint Shiromani Guru Ravidas Ji Maharaj has given a message of importance of education along with eradicating social evils, pretentiousness and immorality from the society. Ravidas Maharaj was a prodigious saint who spread the light of truthfulness in life. Everyone needs to imbibe the message of Saint Ravidas ji and progress in life. Chief Minister Shri Chouhan was addressing the Prakashotsav ceremony and Amritvani programme organised on the occasion of 644th birth anniversary of Saint Shiromani Guru Ravidas Ji at Ambedkar Square in Damoh.

Family Environment Is Important For the Healthy Development…

Madhya Pradesh to set up Agriculture Excellence Centers in…

Chief Minister Shri Chouhan said that the aim of the state government is that every eligible person should get food grains under the public distribution system. Arrangements have been made to provide food grains to 5 and a half crore poor people in Madhya Pradesh. All the poor people will have a pucca house in the next 4 years. Similarly, proper arrangements will also be made to provide drinking water in every village. With the re-introduce of Sambal Yojana, children are getting benefits of other government schemes including studies and scholarships. Similarly, better arrangements have been made for treatment by issuing Ayushman Cards to 2 crore people in the state. He asked to prepare a proposal for constructing a building for the community’s programmes in Kachora village.

At the beginning of the programme, CM Shri Chouhan garlanded the portrait of Saint Ravidas ji and maker of the Constitution Baba Saheb Dr. Bhimrao Ambedkar and welcomed the Akhil Bhartiya Ravidasia Dharm Sangathan’s State Dharmacharya and Saint Shri Ramdayal Shastri and bowed to him and obtained his blessings. Representatives of the society and various associations welcomed Chief Minister Shri Chouhan by offering him bouquets and shawl-shrifal. Chief Minister Shri Chouhan was felicitated by Principal K.P. Ahirwar on behalf of all the associations. On this occasion, Union Minister of State for Tourism and Culture (Independent Charge) Shri Prahlad Patel, Khajuraho MP Shri V.D. Sharma, Urban Development and Housing Minister Shri Bhupendra Singh were present apart from public representatives and a large number of Guru lovers and members of the community.