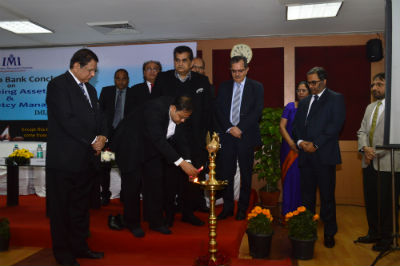 New Delhi: International Management Institute (IMI), New Delhi, one of the most sought-after B-schools of the country, concludes its first ever “Leadership Bank conclave” amidst loud cheer and noteworthy take-aways on 20th January 2018 in the esteemed presence of Shri. Amitabh Kant, CEO, NITI Aayog – Government of India. The conclave focused on key issues concerning banks in the country, such as Non-Performing Assets (NPAs), Insolvency and Bankruptcy Management.

Sharing his thoughts during his welcoming note, Shri Amitabh Kant, CEO, NITI Aayog said, “No country in the world has grown without a sound financial system, without grid banking institutions and financial discipline. For India as a Country, the challenge is not to grow, rather the challenge is to grow at a higher rate.”

“India’s rating has been upgraded and primary reason that has led to a greater investor confidence in the banking sector is the greater transparency in reporting and taking-up discrepancies against stressed assets reported by banks and RBI.”

Dr. Debashis Chatterjee, Director General, IMI-New Delhi shared, “In the globalising financial system we need to look deep, where and how the system is collapsing under heavy NPAs. The cause lies in growing cases of Non Performing Assumptions (assets) not addressed on time, apart from operationally inefficient due diligence and assessment of nature of assets and compromised core values and trust. A serious erosion of values prompted by the lure of high returns, wrong borrowers selection and lack of due diligence can be seen in today’s banking industry”.

“The need of the hour is to innovate and have a surgical strike approach against NPAs, for the Country to be fundamentally strong. This can be done by taking key learnings from veteran banker, Shri. Raj Kumar Talwar, who said – Honesty is the best protection, and not the best policy… Therefore, protect those who are in to assessment and due diligence, and not to forget, the need to be honest and authentic to ourselves and the system around”, he added.