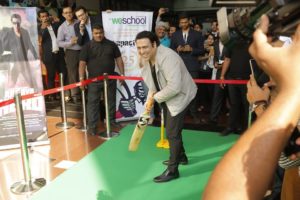 Started in 1993, IMPACT was the initiative its sports loving and dynamic young student Uday Salunkhe who over the years has risen to lead the institute as its Group Director. Apart from having a well-equipped Gym in its basement, WeSchool has also set aside a large hall called ‘Nirvana’ and appointed professionally trained teachers to encourage its MBA students, faculty and staff to make Yoga a part of their lifestyle for developing a balanced mind, body and soul. With a Gym, adventure/outbound activities and IMPACT; sports, adventure and Yoga have become an integral part of the teaching-learning environment and contribute to the young MBA’s academic journey at WeSchool.

As this year marks the 25th anniversary of IMPACT, the event is envisaged to be even grander and the organising team has left no stone unturned to make it an unforgettable event. The teams across the city can’t wait to bag the gold in this silver year. As a matter of fact, IMPACT is running an exciting campaign called #GoldInSilver to give it a bigger boost. Its shinning golden trophy and team jersey were unveiled at the hands of Bollywood star Govinda at the recent Captain’s meet at WeSchool amidst much cheer and applause.

During the inaugural the left-hander Cricketer Jatin Paranjpe congratulated WeSchool for making all the efforts to host the tournament for 25 years, “Tournaments like these represent a very under catered sphere, which is recreational sport whereas in other sports such as Football you have various tournaments such as Futsal or turf football leagues happening throughout the year. I would urge the sportsmen to play the game in the right spirit, take the lessons learnt on-ground and imbibe them in their lives.”

Advocate Shri. S.K Jain, Chairman, LMC, WeSchool and Shikshana Prasaraka Mandali urged the teams, “Give a tough fight to your opponent, and don’t surrender till the last ball is played. Winning the coveted trophy is important but more important will be the lessons learnt on this battle ground. These learnings will go a long way once you start climbing the corporate ladder and face challenges. I believe that the word surrender should not exist in a leader’s dictionary.”

Prof Dr Uday Salunkhe, Group Director, WeSchool who has continued to encourage and mentor IMPACT as a student driven sports activity said, “The sport is not merely a sport as we coming from B-Schools know that there is a great deal of learning on the ground itself. This is one of the only sports tournament that brings business schools of Mumbai together, so I urge all participants to play with great spirit, let the best team win.”

With a good male female ratio in students, faculty and staff, women alumni who are entrepreneurs and achievers, women at WeSchool are always found at the forefront and compete with their male counterparts in a healthy manner. They have not only been involved in the organising of IMPACT 2017, but also participated in Box cricket league to celebrate the International Women’s Day. The team from Media and Entertainment bagged the trophy of Box Cricket among loud cheer.

The tournament started off with 3 matches; MET vs SIES, KJ vs NL Dalmia and Atharva vs Lala Lajpatrai out of which MET, NL Dalmia and Lala Lajpatrai won by 7, 109 and 216 runs respectively. Akash Dandekar (54 not out) – MET, Chintan Pandya (48 runs and 2 wickets)- NL Dalmia and Akshay Thakur (97 runs in 48 balls , 2/18 in 4 hours), Lala Lajpatrai were declared Man of the Match.
WeSchool has been the defending champions for the last three consecutive years and it remains to be seen that among KJ Somaiya, Sydenham , NL Dalmia , MET, IES, Lala Lajpatrai, Atharva, Thakur and Durgadevi Saraf that will be participating, which team will put up the toughest fight to bag the trophy in this silver year.

Nitin Gadkari and Mr. S.V. Nathan felicitate the top achievers at the 22nd…

Udhyam Learning Foundation’s announces ‘Prayaas’ to unlock the potential of…