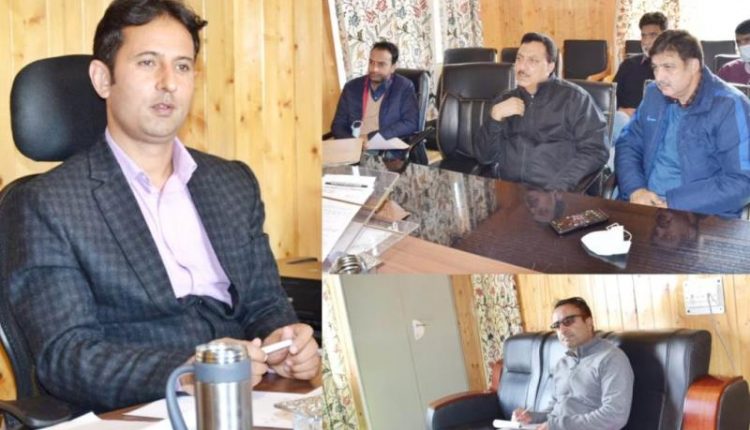 At the outset, Officers gave a detailed presentation about JJM achievements so far. It was given out that more than 30000 households have been provided with house tap connections in the district so far while work is in progress to cover the left out households.

Joint Director Planning said 113 DPRs were prepared and 102 DPRs have been revised. It was given out that 70 DPRs have been received while 32 DPRs are pending. JDP directed officers to submit the revised DPRs within a week’s time for further action.

He said 2021-22 shall prove to be a revolutionary year for Bandipora in providing pure drinking water to the habitants.

He further stated that Rs 309 crores Plan is now approved for Bandipora, which envisages construction of 30 new Filtration plants, 60 Reservoirs in addition to 100 percent coverage of HHs with Functional water connections .

He said the district administration had launched a campaign to provide piped water supply to schools, Ashrams and Anganwari centres and so far more than 90 percent of these buildings have been covered while rest of the buildings shall be provided piped water at earliest.

The Joint Director Planning said that Bandipora became the first district to launch a door to door census in 2019- 20 for coverage of functional Household Tap connections, quality supply and working quantity requirements in UT of J&K. “A book was compiled with panchayat wise results which was appreciated by all,” he added.

The meeting held threadbare discussion on several aspects of implementation of Jal Jeevan Mission including status of tendering and administrative approval of retrofitting schemes, coverage action plan for providing water facility to remaining HHCS in the district and several other issues of public importance.

JDP exhorted upon the officers to work in tandem to achieve desired results within the stipulated time frame. He articulated various components of JJM before the assembly that helped in removal of doubts.