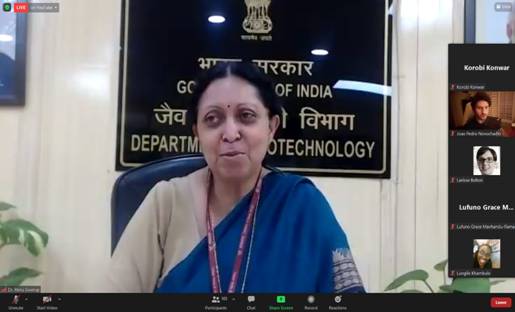 New Delhi: Dr Renu Swarup, Secretary Department of Science and Technology and Department of Biotechnology, Ministry of Science & Technology highlighted the importance of cooperation, collaboration and connections for science to move forward, at the BRICS Young Scientists Forum.

“We know exactly the role S&T innovation has played over the globe to fight the potent war against the pandemic and cooperation, collaboration and connections have been important tools in the path,” she said during her inaugural address of the sixth edition of the BRICS Young Scientists Forum (BRICS YSF) organized by the Department of Science & Technology (DST), in collaboration with the National Institute of Advanced Studies, Bengaluru (NIAS).

DrSwarup encouraged countries to have a science driven agenda and to focus on the importance of globally common themes of translation, generation and application of knowledge. Focusing on the importance of data generation, data analysis and application, she encouraged the participation of youth in these areas and requested scientists to concentrate on precision medicine, genomic tools and biomarkers to help with early detection of key diseases. DrSwarup appealed to the global community to engage through innovation and incubation hubs for data generation, analysis and application.

Prof ShaileshNayak, Director (NIAS) urged the participants to continue engaging in future interactions and networking to produce sustainable solutions and facilitate innovative transition into the future. Shri Sanjeev K Varshney, Head, International Cooperation, DST, emphasized that BRICS conclave can function as a network building opportunity among the young scientists to solve common problems. To incentivize the collaborations, he also proposed fellowships supported by the sponsors of the BRICS YSF 2021.

The BRICS-YSF summits were first hosted by India in 2016, followed by China in 2017, South Africa in 2018, Brazil in 2019, and Russia in 2020. This year the four-day conclave started on 13 September 2021 would end on 16 September. The best young scientist with an idea on innovation would be awarded at the BRICS-YSF 2021. Young innovator prize has been one of the focuses of the BRICS-YSF and the award is supported by the DST, Government of India. The next conclave would be organized by China in 2022.

University of Central Missouri: Ten Home Cooks Put Their Culinary Skills to the…

iednewsdesk Jun 22, 2022
“The Great American Recipe” is a competition that welcomes home chefs from across the nation as they showcase…