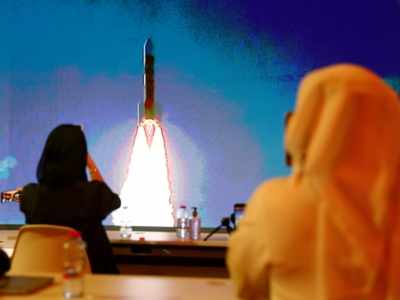 In a first for an Arab nation, UAE launches Mars mission

The United Arab Emirates celebrated in the early hours of Monday morning the launch of its “Hope” probe to Mars, the first interplanetary mission by an Arab nation.

The long-anticipated blast-off of the unmanned spacecraft at 6:58 am local time (2158 GMT Sunday) from Japan’s Tanegashima Space Center was met with rapturous applause in the Emirates.

Meanwhile, the command and control centre at Mohammed Bin Rashid Space Centre (MBRSC) — which spearheaded the Mars project on which some 450 people worked, more than half of them Emirati — was abuzz with excitement.

The UAE Mars mission’s deputy project manager, Sarah al-Amiri, said it was “an indescribable feeling” to witness the rocket launch. “This is the future of the UAE,” Amiri, who is also Minister of State for Advanced Sciences, told Dubai TV from the launch site.

“We are waiting for the moment of separation and the first signal… I thank the UAE for this opportunity,” she said. “Hope” — or Al-Amal in Arabic — has been a source of great pride in the UAE, a newcomer to the world of space.

“A message of pride, hope and peace to the Arab region, in which we renew the golden age of Arab and Islamic discoveries,” the government of the UAE, which is made of seven emirates including the capital of Abu Dhabi and freewheeling Dubai, said on Twitter.

Dubai’s Burj Khalifa, the world’s tallest skyscraper, lit up hours before the launch with a symbolic 10-second countdown in anticipation of the launch that had already been delayed twice this month due to weather conditions.

It is expected to reach Mars’s orbit by February 2021, marking the 50th anniversary of the unification of the UAE.

While the mission objective is to provide a comprehensive image of the weather dynamics in Mars’s atmosphere and pave the way for scientific breakthroughs, the UAE wants the project to serve as a source of inspiration for Arab youth, in an often volatile region.

“‘Hope’ belongs to millions of young people in this region who long for progress, inspiration & opportunity; it’s a direct challenge to those who continue to suppress these aspirations,” tweeted Hend al-Otaiba, director of strategic communications at the UAE’s foreign ministry.

Human clinical trial of COVAXIN to begin at AIIMS today