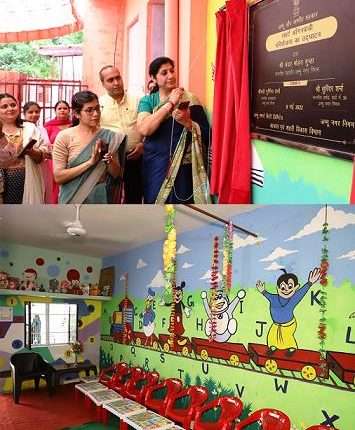 In a first, Jammu City gets 17 Smart Anganwadis

By India Education Diary Bureau Admin On May 7, 2022
Share

JAMMU : In a first, seventeen ‘Smart Anganwadis’ with the state- of -art facilities were inaugurated on Friday by Jammu Municipal Corporation (JMC) Deputy Mayor, Advocate Purnima Sharma in different parts of the City.

These 17 Anganwadis are designed by Jammu Smart City Limited (JSCL) in a way to enhance the physical mental and social development of the children.

Several items ranging from furniture to stationary items were procured to convert conventional buildings of Anganwadis into structures with better amenities.

Speaking on the occasion, Advocate Purnima Sharma said the project was aimed at providing an enabling learning atmosphere to children.

“Several projects for the welfare of the public are being implemented by Jammu Smart City Limited,” she said. She also lauds JSCL for completing projects in a stipulated time frame.

CEO, JSCL Avny Lavasa said that the upgradation of Anganwadi Centers will provide better early childhood care and make the facility more child-friendly to nurture the mental and physical development of children.

She also said the focus of Jammu Smart City Limited (JSCL) was to improve the quality of life of people by enabling local development and harnessing technology to create smart outcomes for citizens.

“The colourful as well as well-informed wall paintings and brightly coloured furniture will create a child-friendly environment,” said the Councillor.