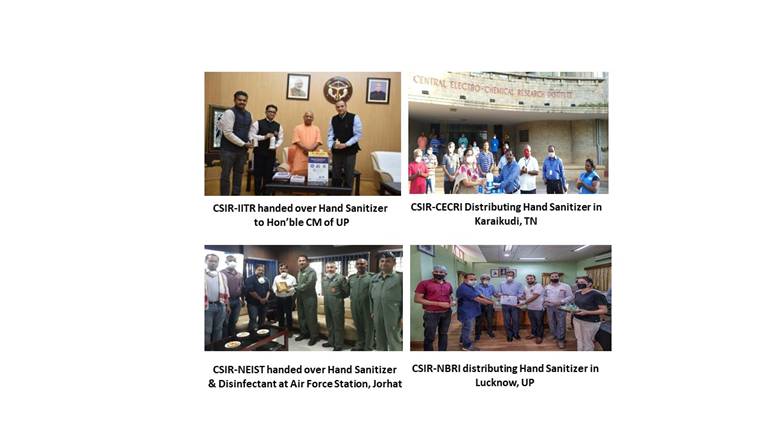 In addition to R&D based technological solutions and products, CSIR deliversimmediate relief by providing hand sanitisers, soaps and disinfectants to mitigate COVID-19

New Delhi: The fight against coronavirus pandemic begins with regular hand washing which has emerged as a major frontline of defence. Alcohol-basedhand sanitisers also kill viruses by denaturing the protective outer proteins of microbes and dissolving their membranes. However, as the pandemic spread rapidly throughout the world, panic buying led to hand sanitisers soon going out of stock even as fake and dubious hand sanitisers started making their way into the market.

Anticipating that sanitation and hygiene would constitute the major frontline of defence against the SARS-CoV-2 virus the CSIR labs stepped up immediately come up with safe, chemical-free and alcohol-based effective hand sanitisers and disinfectants based on WHO guidelines.

“CSIR has always provided technological solutions based on cutting-edge science to some of the most challenging problems that the country has faced,” says Dr Shekhar C. Mande, DG CSIR. “And in combating COVID-19 too our laboratories are bringing to bear their rich scientific experience to develop drugs and vaccines. But at the same time, CSIR has also been quick to provide immediate relief to the country’s citizens in the aftermath of the pandemic – and provision of effective hand sanitisers, soaps and disinfectants to ward off the contagious infection was one such immediate action that our laboratories decided to take.”

Several CSIR laboratories spread throughout different parts of the country kicked off efforts to provide immediate and effective relief to the country’s citizens by manufacturing and distributing hand sanitisers and disinfectants.

· So far, about 50,000 litres of hand sanitisers and disinfectants have been produced within the laboratories of the CSIR and distributed among more than 100,000 people belonging to various sections of the society.

· Besides, the laboratories also networked with local administration to distribute sanitisers and disinfectants among personnel belonging to the police force, municipal corporations, electricity supply undertakings, medical colleges, hospitals, panchayats, and banks and several others

· CSIR laboratories have developed effective, safe and affordable sanitisers and disinfectants from locally available raw materials. For instance, scientists at the CSIR-IHBT based in Palampur, HP, have developed hand sanitiser as per the WHO guidelines, but also contains active tea ingredients, natural flavours and alcohol; chemicals like parabens, synthetic fragrance, triclosan and phthalates have not been used in the sanitiser.

3i Infotech Collaborates with MDEC to Build ASEAN…

· In the South of the country, CSIR-IICT standardized the process for the preparation of alcohol-based hand sanitising gel and 800 litres of which was distributed among Telangana Police and Greater Hyderabad Municipal Corporation workers. Further, CSIR-CLRI, Chennai and in Karaikudi, CSIR-CECRI distributed hundreds of litres of sanitisers among the district administration, municipal corporation, medical colleges, police station and panchayats.

· In Lucknow, several CSIR labs have been very active and CSIR-IITR, Lucknow distributed 2800 litres of hand sanitisers manufactured by it among people in the essential services. The Institute handed over sanitiser units to the district administration, State Mission of Clean Ganga (SMCG), electricity supply undertaking, police administration, district hospital and medical college. CSIR-NBRI also transferred herbal alcohol-based hand sanitiser technologies to two entrepreneurs for large-scale production. It has also distributed more than 1500 liters of sanitisers to health workers, sanitation staff and police personnel in different zones of Lucknow. CSIR-CIMAP also based in Lucknow prepared in its pilot facility and handed over 1000 bottles of its hand sanitiser (Hankool), 1000 bottles of floor disinfectant (Swabee) and 50 litres of floor cleaner (Cleangerm) to the Lucknow Nagar Nigam and District Magistrate for distribution.

· In the North-east, CSIR-NEIST, distributed around 1300 liters of hand sanitisers to Air Force Station in Jorhat, among personnel of the District Administration, Jorhat Railway Station and Police Station, staff of ONGC and FCI, Municipal Corporation in Imphal and also among people of the villages nearby.

· In Jammu, the CSIR-IIIM distributed 1800 litres of hand sanitisers among staff of the government medical colleges, Air Force Station and Indian Army. CSIR-IIP, Dehradun supplied around 1000 litres of sanitisers to the Doon Hospital, the Police Department, and the State Disaster Relief Force.

· In the West, Scientists from CSIR-CSMCRI, Bhavnagar have supplied sanitizers to Bhavnagar Medical College (BMC).

· With the demand for soap rising as a protective measure against the highly contagious Coronavirus, CSIR-IHBT, Palampur has also developed herbal soaps with natural saponins. The composition does not contain any mineral oil, SLES (Sodium laurethsulphate) and SDS (Sodium dodecyl sulphate) and provides effective antifungal, antibacterial, cleansing and moisturising benefits. The technology has been transferred to two Himachal Pradesh based companies for commercial production and making available in major cities across the country.

Further, many CSIR laboratories also managed to rope in and transfer the technology to MSMEs and industries in and around their regions for large-scale production of the sanitisers.

Research at Saha Institute of Nuclear Physics: Apply by May 3