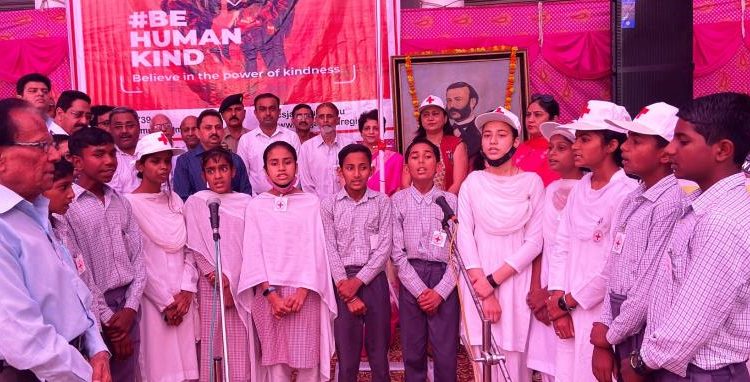 In his address, the Divisional Commissioner Jammu called for exploring full scope for holding activities in a more coordinated and scientific manner to reach out the masses who are in need by giving them Red Cross support. “This is a unique organization, which with the Govt. support, takes care of every section of society especially the sick and the sufferers in times of disaster and accidents: he said and solicited the cooperation of all departments and members of public for reaching out to the unreached. Earlier in his address, the Honorary Secretary briefed about the activities being carried out and the future plan of action prepared by the society for unprecedented times. He also welcomed the Chief Guest , distinguished guests, dignitaries, and the august audience and participants for making the event successful. .

By India Education Diary Bureau Admin On May 9, 2022
Share

JAMMU, MAY 08: As a mark of respect to the founder of Red Cross Movement, Sir Jean Henry Dunant, Indian Red Cross Society on Sunday celebrated World Red Cross Day here at Red Cross Bhawan Kachi Chawni with this year’s theme “#BEHUMANKIND” – endorsing the Power of Humanity of spreading the message on being human and be kind now and in the future as well with our social responsibilities.”

The Flag hoisting was followed by Red Cross pledge and Prayer with the students of Government Middle School, Kachi Chawni and team of Yash Paul Yash leading the gathering of eminent people from the society including the team of Executive Members of Indian Red Cross Society, Jammu Region and other Districts.

The Chief Guest (Divisional Commissioner) was presented with a bouquet and Badge by Sat Pal Sharma, Hony Secretary.

Doctors and Volunteers who attended 2 day First-Aid Orientation and TRIAGE programme were facilitated by the Chief Guest.

Besides, 5 Sewing machines for further distribution to the widows of BPL families already identified by their respective districts along with Search/ Rescue kits were also distributed to all the District Branches of Jammu Division to make the Red Cross Volunteers well equipped enabling them to utilize their services during any disasters in their respective districts for disaster preparedness. Moreover, Sewing Machines were distributed to 15 beneficiaries/ women from Jammu District to enable them to achieve financial independence by enhancing their skills.

Meanwhile, in the past one week, IRC Jammu hosted First-Aid Awareness camps at SMVD University, Katra; in the office of Hospitality and Protocol Jammu and BEE ENN Nursing School, while Medical Checkup Camp was held at Pragwal in collaboration with the Indian Army.

Jammu and Kashmir emerging as new top most investment…

India Education Diary Bureau Admin May 9, 2022
SRINAGAR : Jammu and Kashmir is emerging as the top most new investment destination across the country…

In his address, the Divisional Commissioner Jammu called for exploring…