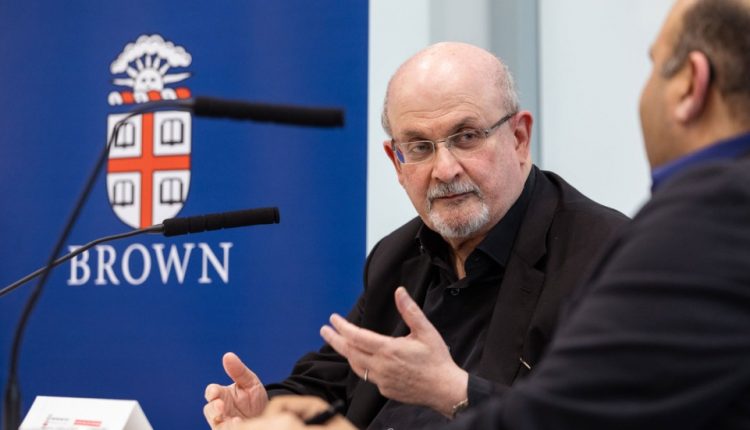 During a panel discussion and Q&A on politics, religion and literature, the acclaimed author urged audiences to maintain balance between preserving freedom of speech and fighting the looming specter of totalitarianism.

In a discussion at Brown University, renowned novelist Salman Rushdie encouraged an audience of hundreds to do all they can to protect freedom of speech, even at a time when countries across the globe are struggling to preserve fundamental tenets of democracy.

Speaking to Brown students, faculty and staff and community members from the Providence area, who participated both in-person and online, Rushdie made the case for defending freedom of all expression, even that which most deem racist or fascist.

“Now we live in a country in which people seem to be forgetting the value of the First Amendment,” Rushdie said. “In particular, young people seem in increasing numbers to be willing to accept that certain kinds of ideas should not be given permission to exist. And I worry about that… Ideas don’t disappear because you suppress them. Sometimes they increase in force. So it’s better to know where the enemy is so you can argue with them and defeat them.”

The panel discussion and Q&A, hosted by the Center for Contemporary South Asia at Brown’s Watson Institute for International Affairs on Friday, Nov. 5, centered the subjects of politics, religion and literature, part of a year-long series of events recognizing 75 years of independence in India and Pakistan. Panelists included Ashutosh Varshney, director of the center and a Brown professor of international studies and political science; Shahzad Bashir, a professor of Islamic studies and history at Brown; and Gauri Viswanathan, a professor of humanities and director of the South Asia Institute at Columbia University.

For more than 40 years, the India-born Rushdie’s novels, short stories, essays and plays have captured the imaginations of millions. He is best known for his profound insights on migration between the Indian subcontinent and the Western world, his deft navigation through decades of complex tensions between India and Pakistan, and his creative use of magical realism to draw historical, religious and literary parallels. Among his countless accolades are a knighthood bestowed by Queen Elizabeth II, fellowships at the Royal Society of Literature in the United Kingdom and at l’Ordre des Arts et des Lettres in France, and the Best of the Booker prize for his novel “Midnight’s Children.”

In the discussion, Rushdie — who has lived in the United States since 2000 — likened the “sacred space” of free speech to a piazza where all citizens are welcome to pass through and discuss anything they like — an idea he riffed on in a New Yorker story in 2020.

“It’s that place where you can go to say anything and be argued with,” he said. “The importance is not that somebody wins the argument, it’s that [the argument] can happen, and it can go on happening. People can change their minds, or… be hardened in their convictions. But the place of discourse exists. That space… should be preserved.”

How Americans, and others, can fight the looming specter of totalitarianism while preserving that “sacred piazza,” Rushdie acknowledged, “is the great question of our time” — one he felt incapable of answering definitively. But one starting point, he proposed, could lie in revisiting the history of the Nazi Party’s ascension to power in Germany.

“Because Germany tolerated the Nazi Party to run in an election, that party then abolished the electoral system which brought it to power,” he said. “And so there’s a thought there: Maybe the limiting point of freedom is… to deny it to people who would deny freedom to others if they came to power.”

The U.S., Rushdie believes, “came very close” to potentially losing its First Amendment rights under President Donald Trump — so close that the author had begun to question his own views on the First Amendment. He acknowledged that as technology and social media make it increasingly easy to spread ideas grounded in falsehoods, it will be crucial to continue debating the “limiting points of freedom.”

Even at age 74, Rushdie said, he still questions his own convictions, something he believes every writer should do.

“I’m always arguing with myself,” he said. “One of the things you’re doing all the time is questioning everything you did before, trying to see what better you can do next. I don’t want to be someone who lays down the law: This is what it is, and nothing else. There’s no full stop. In that sense, all stories are incomplete.”

Rushdie spoke at length of his own literary influences. As a boy, he said, he met the Pakistani poet Faiz Ahmed Faiz, who convinced him that good stories always weave tales of families’ private lives into larger narratives about politics and international relations. He expressed appreciation for R.K. Narayan and Gabriel García Márquez, both masters of magical realism. And he spoke of looking again and again to the greatest French and British novelists for inspiration.

“I think of [Charles] Dickens as a great Indian writer,” Rushdie said. “That Dickensian city, a big, rotting, corrupt place… is exactly like an Indian city now. Jane Austen is a great Indian writer: These brilliant oppressed women having to settle for husband-hunting when they’re so much better than that — again, transport them to India and they fit right in.”

The author also spoke in detail about the experience of physically leaving India, yet never emotionally letting go. When panelists and audience members asked Rushdie about why almost all of his novels are set in India or concern characters from the Indian diaspora — even those that were written in an 11-year period when a fatwa prevented him from visiting the country — he ruminated on the way almost all writers return to their roots through words.

“I think one of the secrets of life is to know who you are, and knowing who you are is knowing where you came from,” Rushdie said. “I started life as a fantasy writer, and that didn’t really work. I thought about why… The answer to that was ‘Midnight’s Children.’ The answer was to go back where I came from, to [reappropriate] a racist slogan. If you look at any writer’s body of work, that’s what they’re wrestling with… What is my place in the world?… For me, that point of origin has always been the place from which I start.”