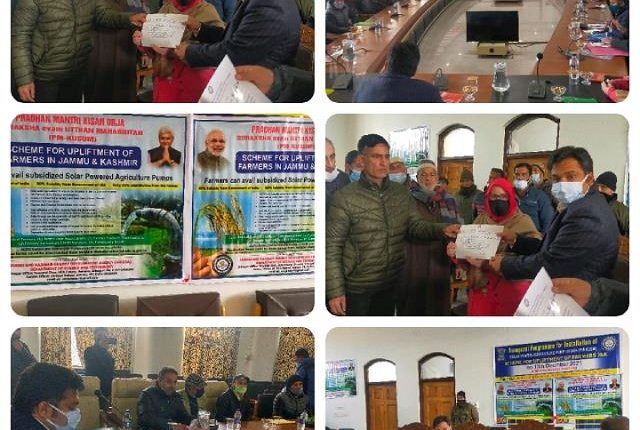 Deputy Commissioner Anantnag, Dr Piyush Singla was informed that the scheme has been launched for the upliftment of farmers in J&K. Through the scheme the farmers can avail subsidized solar powered agriculture pumps with just 20% contribution and 50% will be paid by Government of India and 30% by J&K government. At Least 5000 solar agriculture pumps will be installed in J&K in phased manner and maintenance for five years will be covered by the manufacturing company added the senior engineer M.Ashraf from Jakeda.

The pumps can provide an additional source of income to farmers by selling surplus power to Discoms. The scheme is also aimed at promotion of micro irrigation technology to save water. While interacting with applicants, Ms Rabia Noor from JAKeda said that the scheme is for individuals, farmer producer organizations, primary agriculture credit societies among others. The application form can be downloaded from jakeda website www.jakeda.gov.in.

While speaking on the occasion the DC said that the scheme will definitely play a vital role in addressing the water and power scarcity problems in the areas deficiency of water and power supply. He said the scheme is eco-friendly and will help in reducing the pollution and stress on the environment. He further stressed that the registration and disbursement process must be simplified to achieve the goals of the scheme. Sanction certificates were also given to beneficiaries.

The inaugural programme was attended by CHO, District Agriculture extension officer, officials of Agriculture, jakeda and beneficiaries of the scheme.