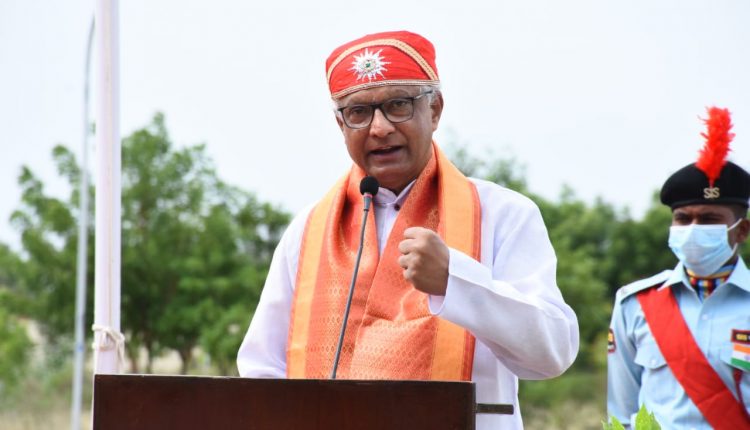 Tiruchirappalli : IIM Tiruchirappalli celebrated India’s 75th Independence Day. The celebrations were attended by faculty, staff, and their families, with proper social distancing and safety norms in place. The event was also telecast live for the students and their families to take part virtually. The celebration began with the hoisting of the national flag by the Director of the institute, Dr. Pawan Kumar Singh. This was followed by the national anthem and a marchpast by the security guards.

In his special address to the students and faculty members, the Director, Dr. Pawan Kumar Singh said that on the auspicious occasion of the 75th Independence Day, we should rededicate ourselves to the service of our nation and mankind. He recollected the sacrifices made by our forefathers who chose death over life to protect the country and free it from the holds of colonization. He paid respect to the various Indian armed forces, paramilitary forces and central armed police force, and dedicated this day to them. He quoted a Thirukkural verse defining the five crowning jewelleries that add beauty to a country: unfailing health, fertility, joy, wealth and a sure defence, and further stated that as students, more emphasis must be laid on national defence. He urged students to choose a career that maximizes meaningfulness and value to the country and its people. He further added that students must invest in rejuvenating industries and improving the general happiness index of the country. He also emphasized on integrating the modern knowledge with the Indian knowledge system.

This was followed by vibrant performances from members of the IIM Trichy family, which included a performance of Vande Maataram, a yoga demonstration by the kids, and a speech about Independence Day. This was followed by a demonstration of Silambam, a form of martial arts famous in South India. The Director then felicitated members of the housekeeping, gardening and security staff for their performance throughout the year.

The celebrations concluded with a tree plantation drive, where numerous saplings were planted across the campus, with the aim of promoting a greener and more sustainable campus.

University of Johannesburg: Against all the odds, resilient Japan pulls it off again