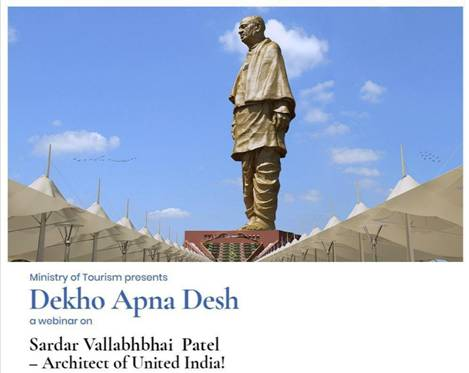 New Delhi: The Ministry of Tourism’s Independence Day themed Webinars conducted as part of the Deko Apna Desh webinar series concluded in a grand manner with a webinar dedicated to Sardar Vallabhbhai Patel -Architect of United India on 15th August 2020.

Due to the ongoing pandemic the Ministry of Tourism this year chose to Salute the nation on web screen on run up to the 74th Independence Day 2020. The Ministry of Tourism had lined up five webinars to commemorate and honour nation’s most significant day. These webinars collectively touched upon themes encompassing the freedom movement, places significant to it and pioneers who had a notable participation in helping India secure its independence.

The session on 15th August 2020 dedicated to Sardar Vallabhbhai opened with the moderator Ms. Rupinder Brar , Additional Director General, Ministry of Tourism requesting all participant to rise for the National Anthem. She recounted how the Ministry of Tourism through web screen has been remembering the sacrifices made by several individuals for freedom from foreign rule, places associated with Independence Day movement etc.

The Webinar opened with introduction on the places associated with Sardar Vallabhbhai Patel in Gujarat by Shri Jenu Devan, Commissioner Tourism, Government of Gujarat and Managing Director Tourism Corporation of Gujarat Ltd.

The webinar was presented by Shri Sanjay Joshi, Additional Collector and Chief Manager, Statute of Unity, Government of Gujarat. Shri Joshi through his presentation highlighted how Sardar Patel was a visionary statesman and Architect of United India. The webinar recounted several incidents from the life of Sardar Patel from his early days of schooling, visit to London to study law, life as barrister, meeting Mahatma Gandhi at Barrister Club in 1916, his election as Ahmedabad’s Municipal President in 1922, 1924, and 1927 and him overseeing reforms in school system in Ahmedabad, relief efforts during natural calamities and high moral principles in not compromising with any form or corruption or misrule.

The webinar also took the participants to various villages and towns in Gujarat associated with Sardar Patel and the memorials that stand there today. These places include Nadiad his Birth Place, his schooling in Nadiad, Petlad, and Borsad,Godhra where he first set up his household and Karamsad where he lived.

Mr. Joshi also narrated the the Bardoli Satyagraha movement and how Sardar Vallabhbhai Patel was called to lead the movement.

The webinar showcased the Statue of Unity – the tallest statue on earth is developed in the memory of Sardar Patel. The statue stands 182 metres high, making it one of the tallest monuments in the world. Shri Joshi spoke about the Project, Project features, facts, milestones, theme based attractions around Kevadia etc.

The Ministry of Tourism invited eminent personalities from the era of pre independence to share their experiences on this occasion of Independence Day namely Shri Padam Rosha an ex-IPS officer and former Director of the National Police Academy, retired as a Director-General of the Jammu & Kashmir police force. He joined the first police force of Independent India in 1948 and was part of the team that set up the Border Security Force. He was awarded, amongst other awards, the Presidents Medal for Distinguished Service. Mr. Rosha is one of the many who were forced to migrate at the time of Partition in 1947. At that time, he was studying at the government college in Lahore, when he had to leave his PhD papers behind and drive across the new border to Amritsar and Jalandhar. Now, at age 97, he often recalls his difficult experience of the Partition.

The webinar also had 94 years old former Second Lieutenant, Rani of Jhansi Regiment of 1943 of India National Army named Rama Khandwala. She spoke to the participants about her meeting with Sardar Patel in Mumbai. She recounted how her life changed in the two years that she worked as a nurse during World War II and her interactions with Netaji Subash Chandra Bose. After experiencing the heroes of a historical war cry, Rama Khandwala resolved to find purpose in nationalism, pursuing India’s undiscovered places as a tourist guide, earning her several accolades in the field. To this day, she stands motivated to showcase India’s history to tourists, believing that India’s unity is its biggest heritage, earned by women like her who saw, in the night of gloom, a dawn of hope.

The webinar concluded with the message that like our courageous leaders of freedom may we keep finding great strength in the power of unity, now and forever.