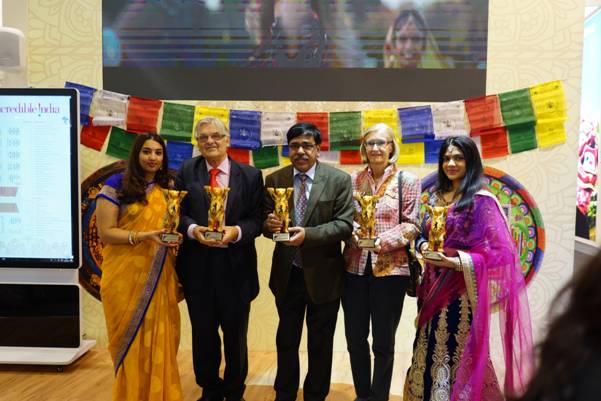 New Delhi: The Ministry of Tourism, Government of India has won the First Prize in the category of TV Cinema Spot at the prestigious international Golden City Gate Tourism Awards 2019. The awards were received by Shri YogendraTripathi, Secretary,Tourism on 08th March 2019at ITB, Berlin being held from the 6th to 10th March 2019.
Following promotional films / television commercials produced by the Ministry as part of its Incredible India 2.0 Campaign received the awards:

Yogi of the Racetrack

The Reincarnation of Mr. and Mrs. Jones

Maharani of Manhattan and

The Golden City Gate Tourism Multi-media Awards are given annually in various categories related to the Tourism and Hospitality sectors. The ‘Golden City Gate’ is a creative multi-media international competition for countries, cities, regions and hotels. The entries received for the awards are judged by an international jury comprising film and tourism experts. The annual award ceremony takes place at ITB Berlin, the world’s leading tourism trade show.

The Ministry of Tourism has launched the Incredible India 2.0 Campaign in September 2017. The 2.0 Campaign marks a shift from generic promotions across the world to market specific promotional plans and content creation. Thematic creatives on different Niche tourism products have been produced and are being used in the Campaign, to cater to diverse consumer interests.These include the above Television Commercials on Yoga, Wellness, Wildlife, Luxury and Cuisine, which have been very well received the world over, registering about 155 million views on social media. The commercials have been produced in English with voice overs in 9 international languages, viz. German, French, Spanish, Italian, Russian, Chinese, Japanese, Korean and Arabic.