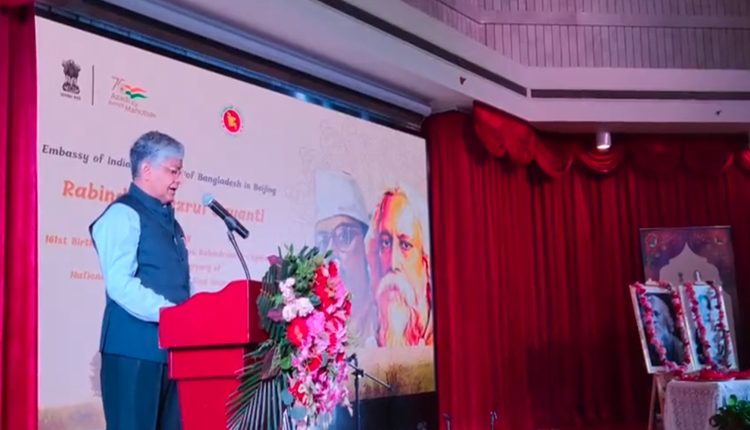 New Delhi: Embassy of India in Beijing and Embassy of Bangladesh in China jointly celebrated the birth anniversary of Gurudev Rabindra Nath Tagore and Bangladesh’s national poet Kazi Nazrul Islam with a delightful cultural medley at Swami Vivekanand Cultural Centre (SVCC) of the Indian Embassy in Beijing on Saturday. The Ambassadors of India and Bangladesh addressed the gathering and gave their insights on how both the nations shared so much in common. India’s Ambassador Pradeep Rawat paid his humble respects to both the iconic poets and luminaries and said it is a celebration of the two men of letters which in many ways embodied the multi-cultural and pluralistic kaleidoscope that is the Indian subcontinent.

Bangladesh’s Ambassador Mahbub Uz Zaman said that both the nations are bonded together through the events that shaped the glorious Bangladesh war of independence in 1971. He also recalled the great relationship between Kabiguru Rabindra Nath Tagore and Bangladesh’s National Poet Kazi Nazrul Islam which he said was blended with respect and love. He said, the literary work of both the poets depicts a common thread of social justice, non-communalism and humanity.

Prasar Bharati Beijing reports that paying rich tributes to Gurudev Tagore, Mr. Zaman recalled that national Anthem of both India and Bangladesh was composed by Rabindra Nath Tagore and the composer of national anthem of Sri Lanka, Ananda Samarakoon also studied at Tagore’s Vishwa Bharati university and was highly influenced by his thoughts.
As India is celebrating “Azadi Ka Amrit Mahotsav” on 75 years of Independence, celebration of Rabindra-Nazrul was an epitome of cultural bond and common heritage between the two countries. It was attended by the members of Indian community and Bangladesh community along with huge participation from Bangladesh Embassy in Beijing which also prepared few delicious Bengali dishes on the occasion.
The cultural events ranged from poetry recitation and song and dance programmes set to Rabindra sangeet and Nazrul geeti to playing of short films on the respective cultural legends. A special recording made especially for this event by renowned singers Rezwana Chowdhury Bannya and Sujit Mustafa was also played at today’s programme. A special performance including multiple Indian dance forms was also presented by the SVCC teacher and Chinese and Indian artists.

Prasar Bharati, Dhaka earlier reported, the government of Bangladesh has announced the theme of the birth centenary of Kavi Nazrul as ‘Rebel’s Centenary’. Indira Gandhi Cultural Centre (IGCC), High Commission of India also organised an evening of Nazrul songs to celebrate the birth anniversary of Kazi Nazrul Islam. His repertoire known as Nazrul Geeti or Nazrul Sangeet is huge. He wrote on a variety of themes. Nazrul’s poems are deeply imbued with a sense of humanism, justice and rebellion against oppression. It was a source of inspiration during the liberation war of Bangladesh.