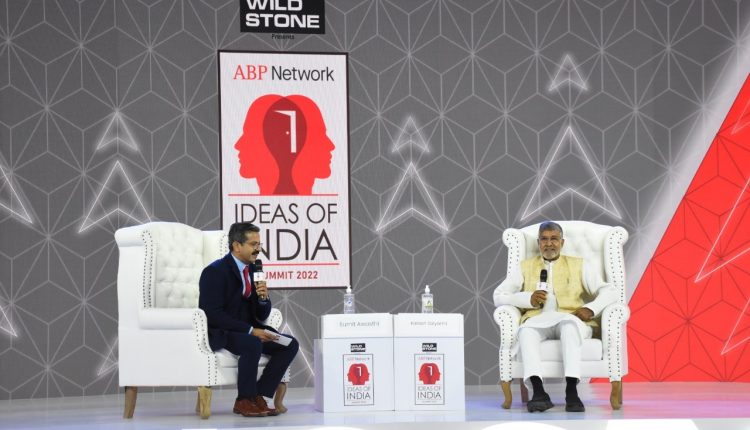 India can regain its erstwhile position of a ‘golden bird’: Kailash Satyarthi

Mumbai : One idea that would again propel India to its erstwhile position of a ‘golden bird’ is that every child in this country can be fearless with complete freedom and that every child gets the same education that children of top industrialists or top political leaders do.
The Nobel Laureate was speaking at ABP Network’s inaugural ‘Ideas of India’ summit that has brought together the brightest brains from diverse sectors to discuss India’s 75-year journey, its present status, and the way ahead. ABP Network is the leading multi-language news channel reaching 535 million individuals in India.
At a session titled, ‘The Humanity Index – Surakshit Bachhpan, Surakshit Bharat’, Dr Kailash Satyarthi said, “Imagine a girl child belonging to one of the poor families from our country’s hinterlands, who is vulnerable to sexual predators or trafficking. Can we put all our efforts together to bring some cheer in her life? Then, India will be truly considered sone ki chidiya or golden bird.
Expanding on the topic, Dr. Satyarthi also said the following:
• “Children in a healthy, safe, and free atmosphere should be sent to school where they can get education at par with the children of politicians, and other influential people.”
• “Today, if you bring happiness on the face of a girl child who comes from a vulnerable background, a year later, you will see that that happiness has brought a change in her life.”
• “India’s first Nobel Prize was awarded to Rabindranath Tagore for literature, but it was stolen. When I met then President Pranab Mukherjee, he told me that India does not have a Nobel Prize, so I decided that the award should be given and dedicated to the country. The President, was surprised by this, because no one else in the world had dedicated their Nobel Peace Prize to the nation in the history so far. When I met the President, I handed him the Nobel Peace Medal, and told him that whatever I am today is because of this country.”
• “The new education policy in India is very good and now people will be free of the pedagogy of thinking that was responsible for so many outdated biases and frameworks, as well as children. The government should ensure that children receive a good education, good health, and a safe environment.”
• “When I first started working 45 years ago, words like child labour and child trafficking were unheard of. There was no law, no strategy, and no awareness of it anywhere on the planet, including India. Dreams have tremendous power, and when combined with determination, everything is possible. India is known for its solutions rather than its problems, which is why Gandhi and Buddha were born here. The government should increase the budgetary allocations and pay attention to the problems of the children, because they are India’s own children.”
Earlier, ABP Network CEO Avinash Pandey, in his welcome address, said, “ABP Network is proud to present the inaugural edition of Ideas of India summit. It is the most elaborate and diverse platform to discuss India’s journey of 75 years as an independent nation, our present challenges, and future opportunities as we grow as a nation in the changing world order. The five main topics of discussion will be Nationalism vs Globalism, Algorithm vs Human intelligence, Sustainable development vs Consumerism, Digital dictatorship vs Digital democratisation, and History of India. I am thankful that the brightest and most successful Indians of our age across sectors have joined us at the summit.”

Sonam Wangchuk asks, “When Will We Be Free to Learn in Our Mother Tongue?”