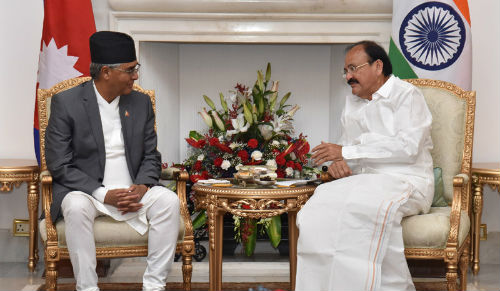 New Delhi: The Vice President of India, Shri M. Venkaiah Naidu has said that India is partnering to create physical infrastructure and establish social institutions in Nepal. He was interacting with the Prime Minister of Nepal, Shri Sher Bahadur Deuba who called on him, here today.

The Vice President said that enhanced connectivity between the two countries will boost economic growth and renewed focus should be given to projects like Terai Roads, Rail links, integrated check posts, as well as Raxaual-Amlekhgunj oil pipeline. He further said that there was immense potential for bilateral cooperation in hydro-power sector and both countries should work for expeditious implementation of Pancheshwar project signed in 1996. We need to expand our cooperation in water resources sector for the benefit of people of our two nations, he added.

University of Reading: SPACE HURRICANE OBSERVED FOR THE…

The Vice President said that Nepal is engaged in the important task of implementing the Constitution and establishing progressive and inclusive political agenda and it is important to establish a political system that accommodates the aspirations of every section of Nepal’s society. He congratulated the Prime Minister and the Government of Nepal for successfully conducting two phases of Local body elections. India would be happy to extend any election related assistance for the upcoming elections in Nepal, he added.

The Vice President said that the open border between our two nations lend uniqueness to our relationship and brings enormous benefits to people of both the nations. He cautioned that we must be vigilant against misuse of the open border by the miscreants. India has been rendering help to Nepal in strengthening Nepal Police and the Armed Force Police by way of providing equipment, vehicles and training, he added.

The Vice President said that India wish to carry along all neighbor countries with it and the Endeavour of our government ‘Sabka Saath, Sabka Vikas’ applies to both to within India and outside India. He further said that India desires to achieve Inclusive Development of India with all other neighboring countries. India is eager to provide developmental assistance for generation of jobs and growth of domestic sectors of all neighboring countries, he added.

All Scholarship Schemes should be Linked to Aadhaar Numbers