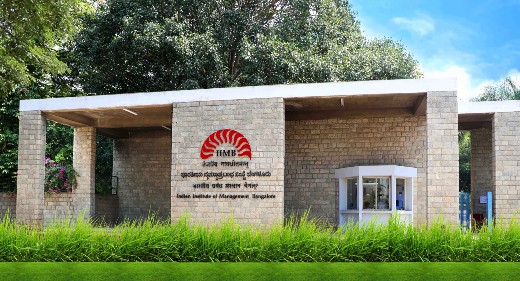 “India has built the self-confidence to consolidate its strategic partnership with the West on its own terms”: Prof. C Raja Mohan

Bengaluru: “As the interface between India and the West grows by leaps and bounds, across a broad range of areas, the current generation has an unprecedented opportunity to become a two-way bridge between the two worlds. Building that bridge will be intellectually satisfying, professionally rewarding and financially appealing. I am sure many of the students of IIM Bangalore will be on that bridge, transforming the societies on both ends and building a powerful strategic partnership between India and the West,” said Professor C Raja Mohan, Director, Institute of South Asian Studies, National University of Singapore, while delivering the Foundation Day Lecture on ‘Reconnecting to the West: India’s New Geopolitics’, during IIMB’s 48th Foundation Day celebrations, this evening.

The 48th Foundation Day of IIMB was celebrated today with speeches, awards and more. The event was held in online mode. The entire programme – from the invocation, the lighting of the lamp, the cultural programme by students, the award of long-service mementos to faculty and staff, the speeches of the Chairperson and Director of IIMB to the Foundation Day lecture itself – was a seamless digital event.

Professor C Raja Mohan’s talk explored the sources and implications of India’s expanding engagement with the US and its allies in Europe and Asia – in economic, political and security domains, and the growing prominence of the West in the nation’s international relations.

In his talk, he reviewed the changes in India’s engagement with the United States, gave an analysis of the developments in India’s ties with Britain and Europe, and discussed what it means for India’s role in the world.

Explaining the meaning of Geopolitics, he gave examples to highlight the fact that human interventions can change geography. “Geography is not just about the physical characteristics of a place. A number of other factors – demographic, economic, technological, political and ideological dimensions – change the nature of geography. When we talk of geopolitics today, we are then talking not just about geography but about a broad range of factors that shape the politics among nations,” he explained.

Ties with the West

Using the term ‘West’ as a political concept, he pointed out that in the current context, a few nations in the West exercise great influence on world politics. He said that, in the present day, it would seem entirely natural that India has good relations with the West, including the US. However, he pointed out that the current scenario evolved slowly through the 21st century. “Although India had bilateral relations with the individual countries of the West, it was totally reluctant to join them in groups. The 1970s saw India drift away from the West. India’s new readiness to participate in Western forums marks a decisive turn in independent India’s world view that was long defined by the idea of nonalignment and its later avatar as strategic autonomy – both were about standing apart if not against the post-War Western alliances.”

But the story of India’s international relations over the last three decades has been one of a slow but definitive movement towards political reconciliation between India and the West and growing cooperation with the United States and its allies, he added, highlighting India’s recent participation in various alliances like Quad, Five Eyes, G-7 meetings, etc.

“While both Delhi and Washington deny that the Quad is a military alliance, it could certainly take India closer than ever before to a security coalition with the West. If India shunned alliances in general, it was even more reluctant to be part of the Western ones; but the idea of Indian participation in looser coalitions of various kinds with different Western countries is no longer taboo in Delhi.”

Beyond the US: Britain and Europe

His talk also touched upon India’s change in foreign policy in terms of strengthening ties with the European Union. “While improving relations with the United States gained traction quickly in the 21st century, moving forward with Britain and Europe was a lot harder. Although Britain and Europe have had a longer and more intimate relationship with India, the problem lay in the colonial past of Britain and Europe. However, Delhi is now strengthening security cooperation with Britain and Europe within the framework of Indo-Pacific geography. Delhi is also seeking free trade agreements with London and Brussels. India’s attitude towards Europe has evolved since the end of the Cold War as it opened up its economy to European capital and technology, sought to revitalize political engagement with the world’s major economies, and diversified its security partnerships. India aims to leverage enduring British strengths for national development, take advantage of the post-Brexit British ambitions for a global role, and find practical ways to better the dynamic between the domestic politics of the two countries,” he said.

India as a great power

Prof. Raja Mohan went on to say that one of the enduring concerns in the Indian foreign policy discourse has been the fear that drawing close to the US and the West will undermine India’s independent foreign policy and strategic autonomy. “Although that fear might have been somewhat true in the early years of independence, today India is the third largest economy in PPP terms. Its GDP has already overtaken that of France, is level with Britain and could overtake Germany’s by the end of this decade.”

“India is also the third largest spender on defense and has one of the world’s largest armed forces. Together with the large size of its market, India is now in a position to negotiate relations with other major powers on reasonable terms. As it sheds the small-nation syndrome and imagines itself as part of the great power constellation shaping the world, India’s foreign policy must inevitably be different from that of a new nation in the middle of the 20th century. India today can and will be a partner for the US and the West on its own terms. It is that self-confidence that is driving India to solidify the strategic partnership with the West.”

“For many of my generation, the West was about escaping the lack of opportunities in India. At home, many saw it as ‘brain drain’. Today, the movement of professionals is seen as ‘brain gain’ and a powerful boost to the modernization of India,” he added.

Dr. Devi Prasad Shetty, Chairperson, Board of Governors, IIMB, lauded India for its efforts in resetting in view of the current situation – in business and in health. “Two years ago, our world faced one of the greatest human tragedies due to COVID 19. We started the war against COVID with very little ammunition; we had no PPEs, we hardly had ventilators, we had no clue on how to manage this dreadful disease. But at the end of the two years, I am confident to say that we are emerging as winners. I am really proud to say that even compared to some of the most developed nations, our country has done a tremendous job in saving precious lives,” he said.

Professor Rishikesha T. Krishnan, Director, IIM Bangalore, lauded the immense efforts of all the stakeholders of the institute which saw another tough year due to the pandemic. “IIM Bangalore sustained its commitment to excellence during the last 19 months despite all the challenges posed by the Covid-19 pandemic. Today, more than 90% of our students are on campus. Everyone has received at least one shot of a Covid vaccine and more than 75% have received both shots. Many programmes are now operating in hybrid mode with some students observing distancing norms being physically present in the classroom and the rest attending the sessions virtually.”

He highlighted some of the top accomplishments of IIMB during the past year including its rankings, internationalization efforts, digital initiatives, placements, fund raising activities, activities by different centres and programme offices, etc. He thanked students, faculty and staff for helping the Institute sustain and enhance its scholastic excellence. He also congratulated the IIMB faculty who receive top honors and awards, as well as the students and alumni who continue to do IIMB proud.

The Foundation Day celebrations also saw Long Service Awards being presented to faculty, including the 10 years’ and 20 years’ awards.

Long Service Awards were also presented to non-teaching IIMB staff, both permanent and contract employees, which included the 10 years’, 30 years’ and the 40 years’ Service awards.

The IIMB community of faculty, former faculty, students, staff and alumni were part of the digital event.