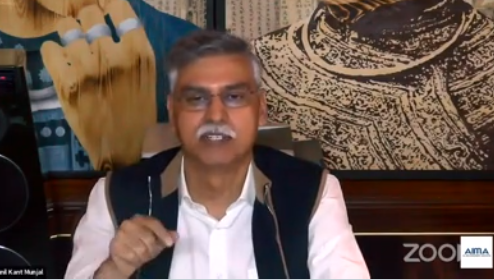 India has lost 30% of its cultural heritage by ignoring it in the mistaken pursuit of only economic growth: Hero Enterprise Chairman

New Delhi: In the past 30 years, India has lost 30% of its cultural heritage as the country has single-mindedly pursued economic growth, while ignoring the softer aspects, according to Mr Sunil Kant Munjal, Chairman, Hero Enterprise, while quoting a DASRA Report.

India’s business leaders need to take interest in building the nation’s soft facets also, Mr Munjal said while addressing the management fraternity at AIMA’s 34th LeaderSpeak session. Mr Munjal has set up a Foundation for Arts and culture in Delhi and he organizes an annual cultural festival in Goa.

Mr Munjal pointed out that most Indian entrepreneurs put everything into business to make it successful but rarely build alternative interests. He advised Indian business leaders to reach out to the 200 million Indians who cannot get two proper meals a day, not for charity but for humanity and for business. “If you can turn them into consumers, you will help the economy,” he said.

Mr Munjal was discussing his award-winning book The Making of Hero: Four Brothers, Two Wheels and a Revolution that Shaped India. The book has been adjudged the Business Book of the Year at Tata Literature Live Festival. A best-seller in English for many months, the book will be available in Hindi in a couple of months.

Mr Singhania also argued that the privileged people needed to not just have an interest in the nation, but they actually had a responsibility to give back. He said that business leaders need not become politicians, but instead of complaining about policies, they needed to speak out on policy issues whether they were heard or not.

Talking about why the Hero Group did not venture into making cars after its spectacular success in two-wheelers, Mr Munjal said that the family’s strategy was to focus on businesses that offered scale, high growth and potential to be global leaders. “Scale is the magic potion in business, as it allows one to influence the business one is in,” he said.

Sharing the story of Hero Honda, Mr Munjal revealed that the Hero family had almost lost the chance to partner Honda because it wanted to make scooters and Honda had already agreed a deal for a scooter joint venture with the Firodias. Mr Brij Mohan Lal Munjal convinced his brothers and decided to accept Honda’s offer to make a motorcycle instead so long as it was the best in the class and most relevant to Indian users’ needs. He also ensured that Hero Honda advertised its product’s fuel consumption as 70 kmph to a litre when it actually did 94 km to a litre in tests. That, according to Mr Sunil Kant Munjal, helped the company win the consumers trust and goodwill. Still, Hero Honda struggled for six years before making a profit.

Replying to a question about managing family dynamics as a business family grows large, Mr Munjal pointed out that there was an inherent conflict in the natures of the business and the family. “Business is a capitalist institution and family is a socialist institution,” he said. However, he explained that the Hero Group did not face family conflict because the group’s business kept growing and room was available for the young members. At the same time, the elders of the family encouraged the young Munjals to work outside and prove themselves. As a result, the third generation of Hero Group has built successful businesses in many areas, Mr Munjal pointed out.

Mr Munjal conceded that not everything and everyone worked out. “It is impossible to get unanimity among a large number of people and one has to try and get everybody to align one way or another,” he said. He pointed out that 80% of the issues in family businesses across the world are common but the solution is unique to each family.

Mr Munjal credited professionals for a lot of the success of the Hero Group. He said that the family needed the best person to run each business. In some cases, the family had the right person and in some, it did not, he admitted. “The family must behave professionally, and the professionals must feel as a member of the family,” he quipped.

Mr Singhania described the Hero book as a study in building a unique management system based on Indian ethos and family values that others can learn from.

More than 1500 persons participated in the session.

Eindhoven University of Technology: The engineers of tomorrow challenge their…

iednewsdesk Jun 25, 2022
The TU/e Contest gives students the opportunity to challenge their innovative ideas. A jury of experts assessed…