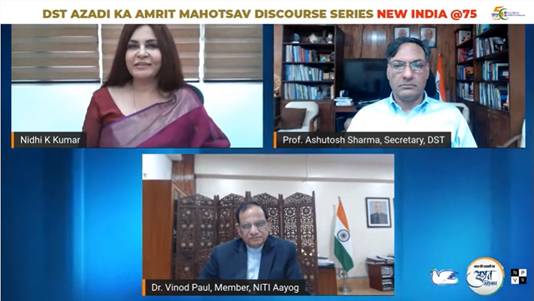 India is well on the path towards WHO recommended doctor to population ratio: Dr Vinod Paul

New Delhi: India is well on the path to have one doctor per thousand population by 2024, which is World Health Organisation (WHO) recommended doctor to population ratio and is increasing the number of beds from 11 lakh to 22 lakhs, Member, NITI Aayog Dr Vinod Paul highlighted at a discourse series.

“In the last 75 years, India has made significant progress in the health sector. At the time of Independence, the average life was just 28 years, and it has now reached close to 70 years. However, we are still far away from meeting the aspirations of people in terms of access to health services, and this remains a challenge. We have taken a lot of steps to address these problems in the last six-seven years, and results are encouraging,” Dr Paul pointed out at the online Department of Science & Technology (DST) Azadi Ka Amrit Mahotsav Discourse Series New India @ 75, organised by National Council for Science & Technology Communication and Vigyan Prasar.

“Ayushman Bharat Yojna and Jan Arogya Yojna are the programmes that focus on providing all kinds of health facilities to people and are steps towards universal health coverage, affordability and accessibility to health facilities. Under Jan Arogya Yojna, 50 Crore people are eligible now for affordable health services. Major push has been given to primary health care. By the year 2022, 150,000 primary health care centres would be in place in rural as well as urban areas of the country, and these centres would be hub for primary health care. We have taken various steps to address the problem of availability of human resources in health. A very significant push has been given to bridge gaps by training doctors and doubling post-graduate seats,” he added.

Prof Ashutosh Sharma, Secretary, DST, highlighted the contribution of DST in the development and progress of the country in the last 50 years and its efforts to make India the science, technology and innovation power in the world.

“DST is a nursery to help, nurture and grow young talents for the progress and development of the country. DST has the capability to create future talents, and in the last five years, we have launched a whole lot of schemes and have taken various steps to identify loopholes and rectify them to ensure that science, technology and innovation plays the key role in progress and development of the country,” Prof Sharma said.

He spoke about the role of DST in the framing of several policies like the Science Technology and Innovation Policy 2021 that would empower every sector in the country to march towards economic development along with social inclusion and environmental sustainability for achieving an Atmanirbhar Bharat, Geospatial Data Policy that would be a game-changer and help democratization of data in every nook and corner of the country, policy on infrastructure in Science and Technology as well as Scientific Social Responsibility policy.