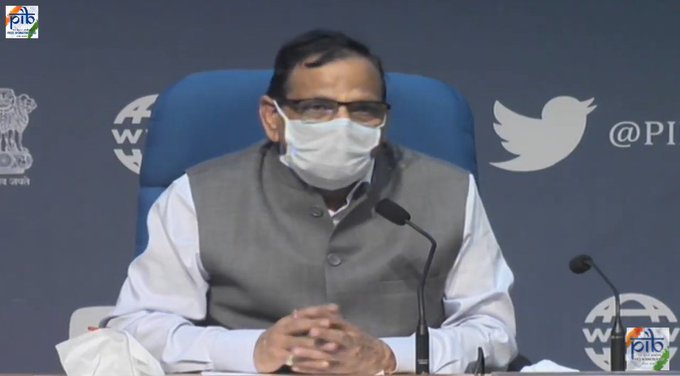 New Delhi: More than 5 crore tests have been conducted so far, which take India to the second highest position in terms of testing. More than 10 lakh tests have been conducted daily in this week. At the same time, the number of recovered patients is more than 33 lakhs now, and, the highest single day recovery of 73,642 patients has also been recorded in the last 24 hours. This has been stated by the Union Health Secretary Shri Rajesh Bhushan, in course of a media briefing on the actions taken, preparedness and updates on COVID-19, held at New Media Centre today. The Case Fatality Rate of the country is also continuously declining, added the Health Secretary.

Although the cases are on the rise in terms of absolute numbers, India still has 3,102 cases per million, which is one of the lowest in the world. Within a span of two weeks, the national average figure of tests per million has increased from 26,016 to 36,703. More than 10 lakhs 47 thousand 471 tests have been conducted in average on a daily basis, while more than 11 lakh tests have been conducted on the 3rd and 4th September. With the rise in testing capacity and also of recoveries, the gap between active and recovered cases is continuously widening. As on today, while there are around 8 lakhs 83 thousand active cases, the number of recoveries have crossed 33 lakhs. India’s death per million is 53, which falls amongst the lowest in the world. Along with this, the case fatality rate in the country is continuously declining and stands at 1.70% as on date. The Health Secretary gave full credit to the healthcare workers, including doctors, paramedics, treating clinicians, hospital support staff among others. Government of India has issued a standard treatment protocol for the benefit of health care workers and it is being followed in most of the states, stated the Health Secretary.

Maharashtra, Andhra Pradesh, Karnataka, Uttar Pradesh and Tamil Nadu are the five states which account for 62% of the active cases. Maharashtra’s share is around 27% of the total active cases, which in terms of absolute numbers is 2.37 lakhs. On the other hand, there are 14 states and UTs which have less than 5,000 active cases at present. There are also 20 states and UTs where the number of active cases are between 2,000-5,000. This apart, nearly 70% of the COVID-19 related deaths are also being reported from 5 states, that is, Maharashtra, Tamil Nadu, Karnataka, Andhra Pradesh and Uttar Pradesh. “The states where active cases are mostly concentrated are also, more or less, accounting for most of the deaths”, stated the Health Secretary. Hence, from the perspective of public health, it is important to take targeted actions in these states, both by the state and Central Governments. “That is why we specially remain in touch with these states. A detailed interaction through video conferencing was held on last Saturday with these states where the Health Secretaries and District Chief Medical Officers of the highly affected districts participated. Certain successful strategies for fighting against COVID-19 were shared with them”, stated the Health Secretary. This apart, 28 States & UTs have a Case Fatality Rate which is lower than the national average, further stated Shri Bhushan.

Dr. V.K Paul, Member (Health), NITI Aayog said, our COVID-19 case numbers are looking big since we are testing in a very liberal manner, which has in turn helped us to reduce mortality rate. He further said, we should create an environment where no one is afraid of testing, it is dangerous to the individual and also to the system if one does not test despite experiencing symptoms. “We should be afraid of the virus, not of testing; we should create a culture where everyone who experiences symptoms proceeds to get oneself tested”, appealed Dr. V.K. Paul.

The Member (Health), NITI Aayog further said, as economy has been opened, if we adopt lax behaviour and do not practise discipline, it makes it easier for COVID-19 virus to spread; hence, we all should wear masks, maintain social distancing, avoid large gatherings and take immunity boosting measures all the more. These still remain the key of slowing and controlling a pandemic. “We are getting complaints from State governments that people have become lax in following COVID-appropriate behaviours”, he informed. It is even more important today that we continue to follow precautionary behaviours against COVID-19, cautioned Dr. Paul. He added, it is primarily an individual’s responsibility to keep the virus away from one’s self, while the system’s responsibility is to carry out containment measures, contact tracing, surveillance and so on. He further said, “Our treatment protocols have been evolved in a very good manner, based on our progressive understanding of the pandemic; we have now become confident of our protocol; hence, we appeal that the treatment protocol is followed meticulously by everyone. Especially for people residing in rural areas, it is more important that the patient and family take prompt action to do testing, on appearance of symptoms”. Dr. Paul also appealed to the media persons to spread this message further.

In reply to a media query, Dr. Paul said, Russia has requested India’s help in manufacturing of vaccine by Indian companies and conduct of Phase-III studies in India. India attaches high importance to the request from a special friend and on both fronts, there has been considerable progress. “We are working with this vaccine candidate for manufacture as well as trial and regulatory facilitation, in the spirit of partnership and science for humanity”, he said. The outreach has been extended to the vaccine manufacturers in India. About four of them have already come forward, the others are in talks with the Russian counterparts and the Government is facilitating that process of creating a connect. There may be specific outcomes very soon in that regard. This is a win-win situation for India and the world, indeed. India can manufacture that vaccine in large and significant quantities. On the regulatory front, Indian scientists have looked at the data. There would be a need for Phase III trials in normal course of things, stated Dr. Paul.