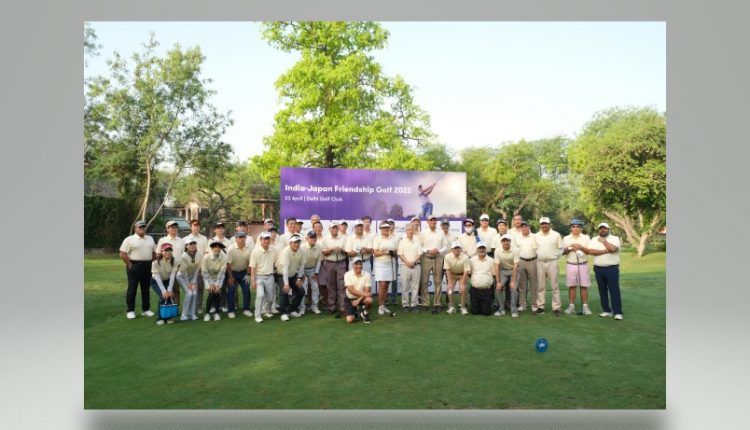 Delhi: Ending the week on a high note, New Delhi witnessed a joyous celebration of 70 years of diplomatic relations between India and Japan.

Grant Thornton Bharat, in partnership with the Delhi Policy Group and the Ministry of External Affairs, organised a first of its kind India-Japan Friendship Golf tournament at the prestigious Delhi Golf Club today.

The event drew enthusiastic participation from Japanese diplomats and corporate leaders as well as Indian counterparts from the host organisations and the business community. Representatives of several leading Japanese companies and entities were among the participants, including JETRO, JCCII, Maruti Suzuki, Mitsui, Toray, Sojitz, Sumitomo, SMBC, Mizuho and Japan Airlines.

H.E. Mr. Satoshi Suzuki, Ambassador of Japan to India, and Mr. Naveen Srivastava, Additional Secretary in the Ministry of External Affairs, joined the participants at the tee off and the post-game festivities.

Ambassador H. K. Singh, Director General, Delhi Policy Group, said that the event symbolised the warm people to people ties that have been the hallmark of India-Japan relations since their inception 70 years ago. As Asia’s leading maritime nations committed to democracy and the rule of law, India and Japan share important responsibilities for shaping a free and open Indo-Pacific. Coming shortly after the successful Bilateral Summit held on March 19, this event is a particularly timely celebration of the India-Japan strategic partnership.

Vishesh C. Chandiok, CEO, Grant Thornton Bharat, said, “2022 is a watershed year as it marks the 70th anniversary of diplomatic relations between India and Japan and also coincides with the 75th year of India’s independence. As two out of the top three Asian economies, India and Japan are natural partners, complementing each other’s needs and strengths, while sharing essential values such as political liberalism, market driven economies, the rule of law and democracy and the ethos of hard work and family. As this relationship becomes the defining partnership of the new Asian era, driven by shared political, economic and strategic interests, I am confident that initiatives such as the India – Japan Friendship Golf will further strengthen the socio-economic ties between both countries.”