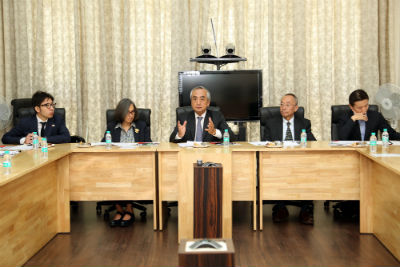 Bangalore: H.E. Kenji Hiramatsu, Ambassador of Japan to India, and Mr. Takayuki Kitagawa, the Consul General of Japan in Bangalore, led a delegation to the Indian Institute of Management Bangalore today to understand the goals of the newly launched India-Japan Study Centre and interacted with the faculty body of the premier management school.

The India-Japan Study Centre was inaugurated at IIM Bangalore on September 14, when the two Prime Ministers were meeting in Ahmedabad to inaugurate the high speed rail project in Gujarat. The Ambassador welcomed IIMB’s initiative, saying: “The setting up of the India-Japan Study Centre is a very valuable and timely initiative, especially at a time when the India-Japan relationship in business and investment is perhaps at its very best in history, guided by two very strong leaders – Prime Minister Modi and Prime Minister Abe. Your study centre has our whole-hearted support.”

Explaining that he would like to focus on people-to-people exchange programmes between the two countries, especially faculty teaching Japanese language here, the Ambassador said it was a privilege to work on more collaborations with IIM Bangalore, “a place where talented students train to be global managers”.

The Ambassador said Bengaluru was very important to Japan as many Japanese companies are located here. “It is a global start-up city and a city of intellectuals – a very exciting city for us,” he remarked, adding that he would like to invite more Japanese companies to Bengaluru as early as December. “It is therefore particularly significant that IIM Bangalore is doing exciting work with Japan and we should work on more joint research projects and exchange programs.”

The delegation sought details on the language training program, the student exchange program and the training program for executives.
Prof. Krishna Sundar spoke of the growing number of IIMB’s students choosing country-specific programmes to Japan among other countries. “We have increased the number of students going on an exchange programme to Japan from 30 to 60 in our two-year MBA programme in the last year,” he said.

On the language training front, Prof. Krishna Sundar said IIMB has, for the past 15 years, been offering Japanese language as an elective. “With the setting up of the IJSC, we hope to add impetus to this offering.”

Teach For India Fellowship: The movement for an India filled…

Celebal Technologies has earned the Al and Machine Learning…

On the EEP offering, he gave details of the course being currently designed for executives of Sakra Hospital. “We are also designing courses for middle management executives where part of the course is delivered at IIMB and the other part at our partnering University in Japan.”

Listing the industry connects that IIMB has with Japanese MNCs, Prof. Jose explained the nuances of IIMB’s partnership with Mitsubishi Corporation. “As a first step, they helped us set up the Mitsubishi Case Recording Lab to record our cases. They suggested that we translate some of our courses to Japanese for a Japanese audience and we are now doing that.”

Prof N.M. Aggarwal shared his experience of collaborating with Toshiba and some details about the cases that had been written in this regard.

Prof. Krishna Sundar added that the high speed rail project had immense potential for case writing at IIMB, especially as IIMB’s Director Prof. G. Raghuram is a domain expert on the railways and has been sharing his views on the project in the mainstream media as well.

N. Ravi, Indian Foreign Service (Retd) and Senior Fellow at IIMB, who was also instrumental in setting up the India-Japan Study Centre, also addressed the gathering.

Prof. K Kumar, Chairperson, Academic Programmes, NS Raghavan Centre for Entrepreneurial Learning (NSRCEL) at IIMB, gave an overview of the incubation and mentoring activities of NSRCEL.
Prof. G Shainesh, faculty from the Marketing area, sought to know what would be done to increase the number of Indians visiting Japan.

Shobha R Kaveri, from IIMB Management Review, IIMB’s practitioner journal, proposed the vote of thanks in Japanese much to the delight of the visitors.

Teach For India Fellowship: The movement for an India filled with love and compassion