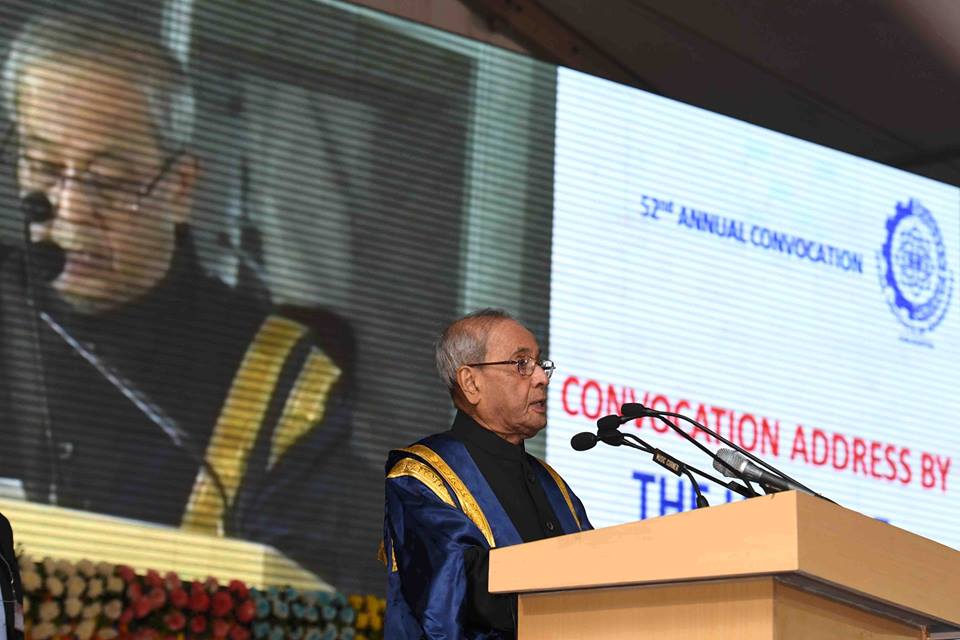 India is a land of tolerance, says President at 52nd Annual Convocation of Indian Institute of Management, Calcutta

Speaking on the occasion, the President said he was happy to address the fifty-second convocation of the Indian Institute of Management, Calcutta, which is a leading institution for management education in the country. He was also glad to observe that the campus has retained its distinctive charm. Yet, the initiatives underway to expand the facilities and enhance the infrastructure of the campus are visible, he said. IIM Calcutta was established on November 14, 1961 to give shape to the vision of Pandit Jawaharlal Nehru. The IITs and IIMs were envisaged by Pt. Nehru as national institutions of excellence in engineering and management education that would mould high caliber of human capital. Over the years, IIM Calcutta has endeavoured to walk this path of excellence.
The President said that the atmosphere in our institutions should be free from both physical as well as mental violence. Indians could be described as argumentative but never intolerant. In ancient India, seats of higher learning such as Nalanda, Vikramshila and Taxila attracted mighty minds from all over the world and truly became a confluence of civilizational thoughts and ideas. He quoted Gandhiji and said “I do not want my house to be walled in on all sides and my windows to be stuffed. I want the cultures of all lands to be blown about my house as freely as possible. But I refuse to be blown off my feet by any”. If our feet are firmly on the ground, we will not be blown off by ideas from outside. India is a land of tolerance. We adopt, embrace and absorb but never reject. Let there be debate, disagreement and dissension but not intolerance.
The President said that he had been repeatedly emphasizing that institutions of higher learning in our country should find their place in the top global rankings as per rating agencies. He was happy that now a couple of Institutions are finding their rightful place in this regard.

LPU preparing its Girl-Students as Ambassadors of Self-Protection