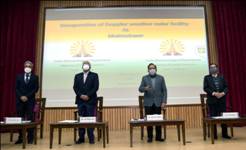 Conveying his greetings to all the officers and staff of IMD & the Ministry of Earth Sciences and entire meteorological community, Dr. Harsh Vardhan said, “IMD has been playing a significant role in protecting lives and livelihoods from the adverse effects of extreme weather events since its establishment in 1875”. He highlighted that forecasting monsoons, that are lifeline to our food security, has resulted in not only in improvement of economy but also reducing the loss of lives due to monsoonal floods and droughts. “IMD has been continuously redefining its focus for accurate Prediction of Monsoon and cyclones as our GDP is mainly based on agriculture. It has succeeded in minimizing loss of lives from various extreme events like cyclone, heavy rain, thunderstorm, heat wave and cold wave etc. in the recent years with its precise forecasting and timely warnings”, he added.

The Minister pointed out, “Recently in last monsoon season, IMD introduced Flash flood Guidance for all 30,000 watersheds of the country every 6 hours. Flash flood Guidance is also provided to Nepal, Bhutan, Bangladesh, Sri Lanka every 6 hours”. He recalled having inaugurated the Urban flood warning system for Mumbai also in July 2020 which has helped in better management of heavy rainfall events and floods over Mumbai, and added that similar system has also been implemented in Chennai and being extended to Kolkata and Delhi in coming years.

Dr. Harsh Vardhan said, “India Meteorological Department is modernizing its observational network in the Central and Western Himalayas by installation of state of art Doppler Weather Radars in a phased manner, at different locations”. “This radar will be providing severe weather information to the weather forecasters thus improving the service being provided by the Department catering to the welfare and safety of the public in the states of Uttarakhand and Himachal Pradesh. It will also provide valuable support to the disaster managers and to the pilgrims undertaking the pilgrimage to Kailash Manasarovar and Char Dham yatra”, he highlighted.

The Minister elaborated that the output by Multi-Mission Meteorological Data Receiving and Processing System that has been established in IMD in collaboration with ISRO, will be utilized for monitoring and forecasting of severe weather events and many sectoral applications Defence services, Disaster Management, Power Sector, Aviation, Railway, Tourism & Agro-meteorological advisory services etc by generating specific satellite-based products imageries. He also applauded that India is 4th in its computing power after UK, USA and Japan and pointed out, “I am told that we are the only country to have two ensemble models with the resolution of 12 km each which were helping to provide the probabilistic forecast and warning for severe weather”.

Chief Minister of Uttarakhand, Shri Trivendra Singh Rawat and Chief Minister of Himachal Pradesh, Shri Jai Ram Thakur applauded the IMD for its great services in meteorological forecasting that helps the two hilly states in saving lives and property. Both of them highlighted the importance of accurate and advance weather information for their states as they are largely dependent on agriculture and tourism.

Director General, IMD, Dr Mrutyunjay Mohapatra in his welcome address highlighted that there has been significant improvement in forecast accuracy of various severe weather events including tropical cyclones, heavy rainfall, fog, heat wave, cold wave, thunderstorm etc. “The accuracy has increased by about 15-40% for different severe weather events forecast during last five years. The thunderstorm warning is being provided for all districts and 894 cities and towns”, he said.

On the occasion, Secretary, MoES, Dr. M. Rajeevan gave a broad outline of important developments being planned for IMD in near future. He informed that under Agro-Meteorological Services, it is targeted to establish 660 DAMUs by 2025 and increase from 2,300 blocks in 2020 to 7,000 blocks in 2025. The advisories will cover 70 million Farmers by 2022 and 100 million by 2025. More than 43 million farmers have subscribed for the information through mobile for planning their agricultural activities. He said that the warning and advisory services are helping farmers and fishermen to improve their economy as found from a latest survey by National Centre for Applied Economic Research.

WMO has recognized IMD for various activities like continuous observations for more than 100 years. About 12 observatories in the country have been recognized so far as centennial stations. IMD earned appreciations from United Nations and the President of India, Govt. of West Bengal and Odisha for accurate prediction of cyclone Amphan, from Govt of Maharashtra for accurate prediction of cyclone Nisarga and establishment of Mumbai Flood Warning System.

Awards and Appreciation certificate to officials, scientists, and IMD institutions in various states were also announced on the occasion.

Truly astronomical: over half a billion celestial objects mapped