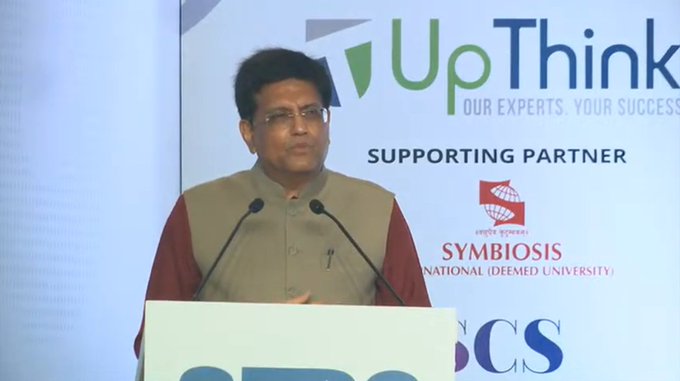 New Delhi: The Minister of Commerce and Industry, Consumer Affairs, Food and Public Distribution and Textiles, Shri Goyal today said that India is poised to achieve services export target of $1 trn by 2030.

He was addressing the gathering at the at the ‘Services Export Promotion Ccouncil- Global Services Conclave 2021” in New Delhi today.

The Minister said that Services are a key driver of India’s economic growth.

He added that services sector provides employment to nearly 2.6 crore people and contributes approximately 40% to India’s total global exports. He added that Services trade surplus was $89 bn in FY 2020-21 and it has been the largest FDI recipient (53% of FDI inflows 2000-2021).

The theme of the Global Services Conclave 2021 was India Serves: Exploring Potential Growth Sectors Beyond IT/ITes’.

Emphasizing that Service sector is our competitive advantage, powered by Skills, Startups and IT Solutions, the Minister said that today, Indian services have the twin power of universal acceptance & universal attraction.

“Sectors like tourism, hospitality, etc. which suffered due to COVID-19, showing revival signs” he added.

Appreciating the spirit that led to rise through the tough times faced by the sector, Shri Goyal said that tough times don’t last, but tough people do. He expressed his admiration for the selfless service of all frontline workers during the COVID 19 pandemic.

The Minister said that in 2020, India became the 7th largest services exporter in the world, moving up the ladder by two positions. Services PMI rose to a decade high of 58.4 in Oct’21, he said.

Emphasizing that India had the potential to become the top services exporter in the world, Shri Goyal said that Services is boosting India’s transition from an Assembly economy to a Knowledge based economy.

Global sentiments are changing from ‘Why India’ to now “Serve the world from India”, he said.

Observing that India has transformed from being the ‘Back office’ to the ‘Brain office’ of the world, the Minister said that Microsoft, Google etc. call India “A home away from home” as the have the biggest offices outside US in India.

Shri Goyal said that today, India’s Services export largely comprise of IT/ITes and stressed that we need to focus on other potential growth sectors. India’s IT (Inherent Talent) will help expand reach of India’s service sector far beyond the IT services, he said.

The Minister listed certain crucial sectors which can catapult India’s services sector on a high growth trajectory such as higher Education. He spoke of the massive potential for Online training courses, language courses, the horizons of which have been further expanded by the New Education Policy.

He observed that students from US, Canada, UAE, South Korea etc. prefer India for heritage, art and culture studies.

Speaking of the Tourism & Hospitality sector, Shri Goyal said that in FY20, tourism sector accounted for 39 mn jobs, 8% of the total employment.

He outlined possible new initiatives to boost tourism sector such as development of new innovative bundle tour packages and said that hospitality industry has big potential and many developed countries can take a lesson or two from India.

In the field of healthcare, the Minister said that India is the 2nd largest supplier of nurses to OECD, Gulf countries & Asian countries like Singapore & Malaysia. He spoke of the need to establish more nursing institutions in other states.

Referring to the Audio-visual sector he said that India exported $ 835 mn worth of AV services in 19-20. He also highlighted the huge opportunities that lie in Cloud gaming, Virtual reality, etc

The Minister assured that the Government was actively pursuing market access opportunities (FTAs) and working on a scheme alternative to SEIS.

He said that the Government supported service sector through Aatmanirbhar Bharat Package, Collateral-free Automatic Loans for Businesses, including MSMEs.

The Minister also highlighted the need for assisting States in formulating a comprehensive export strategy with districts as Export Hubs.

Shri Piyush Goyal said that the Government as a facilitator and enabler helped Indian Services to grow & touch lives across the globe. He emphasized that Zero Government interference has enabled IT sector to excel. He appreciated the sector for not pursing incentives but standing on its competitive strength.

He appreciated the efforts of SEPC for organising the conclave for bringing in mojo to aspire to Charting the way forward, the Minister said that we must introduce more standards & improve quality. We must move up the value chain in services and pick areas where our strength lies and expand on that, he said.

He suggested the replication of the Bengaluru IT model in other parts of India and the establishment of service industries in India like MRO of ships/aircrafts, Environment consulting etc. He also said there is a need to expand markets for Legal/Accounting professionals.

Quoting Shri Atal Behari Vajpayee, Shri Goyal said that “Our aim may be as high as the endless sky, but we should have a resolve in our minds to walk ahead, hand-in-hand for victory will be ours”.