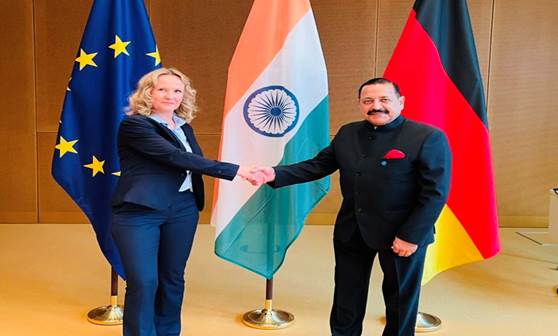 New Delhi: India today reiterated its commitment to environmental and climate causes and pointed out that we have launched National Hydrogen Energy Mission and several such initiatives to fulfil India’s commitment at COP 26 of achieving net zero emissions by 2070.

The agenda of the meeting was Adaptation to climate change, Biological diversity, Oceans and Artificial intelligence for environmental protection.

In view of the imminent future challenges on the climate and weather, Dr Jitendra Singh expressed interest to augment our cooperation in this field including Model Development, Application of Forecasts in the renewable energy and of course use of Artificial Intelligence/Machine learning. He mentioned that Science & Technology has been one of the strategic pillars of bilateral partnership and suggested to explore possibilities of bilateral scientific cooperation in emerging areas of Weather and Climate Research, specifically, on trends of regional climate extremes and variability of vulnerable areas including tropics and high-latitudes. Dr Jitendra Singh noted with satisfaction that India is working towards Probabilistic Tsunami Hazard Assessment (PTHA) in the Makran region through UNESCO-IOC and funded by UNESCAP, where German experts and institutions are part of this initiative.

Ms. Steffi Lemke, German Environment Minister reciprocated the proposal and briefed on German advancement in these areas and agreed to work out new collaboration

India Education Diary Bureau Admin May 2, 2022
New Delhi: The Ministry of Ayush, Government of India, with active support from Government of Assam, organized a…