The Vice President, Shri M. Venkaiah Naidu, who is on a three-nation tour, arrived in Senegal yesterday where he was received by Ms. Aissata Tall Sall, Minister of Foreign Affairs from the Senegalese side at Dakar airport. This is the first ever high level Indian visit to Senegal and is taking place at a time when both countries are celebrating 60 years of their diplomatic relations. 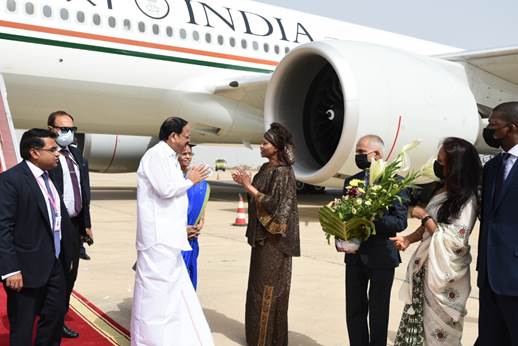 In the capital city of Dakar, Shri Naidu led delegation level talks with the President of Senegal, H.E. Mr Macky Sall and assured Senegal of India’s continued commitment to support the socio-economic development of Senegal through all means, bilateral, regional and international frameworks. Vice President Naidu meeting the President of Senegal in Dakar on June 1, 2022

During these talks, three MoUs were signed by both sides to further deepen their bilateral partnership in various areas. The first MoU pertains to visa-free regime for Diplomatic and Official passport holders which would strengthen cooperation between the two countries through seamless travel of officials/diplomats.

Second agreement relates to renewal of Cultural Exchange Progarmme (CEP) for the period 2022-26. Appreciating the richness of Indian and Senegalese culture, Shri Naidu expressed confidence that with the renewal of the CEP, there will be more cultural exchanges, thereby strengthening our people-to-people contacts.

Third MoU seeks to enhance bilateral cooperation in youth matters. Recognizing that both India and Senegal have relatively young population, the Vice President expressed confidence that this MoU will be mutually beneficial to our two countries through sharing of information, knowledge and good practices, and youth exchanges. 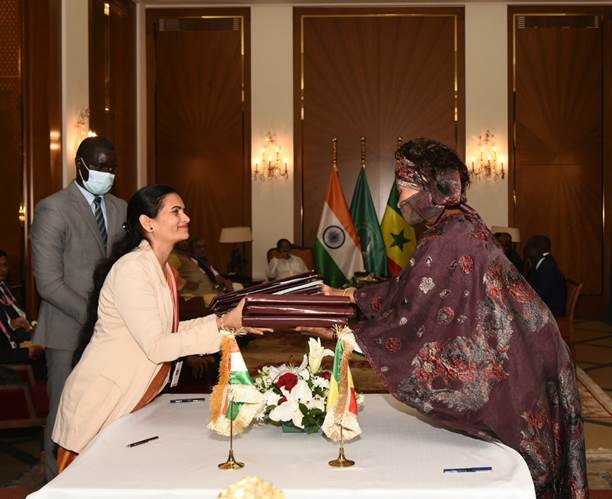 Union Minister of State for Health & Family Welfare, Dr. Bharati Pawar and Senegalese Foreign Minister, Ms Aïssata Tall Sall signed and exchanged MoUs in the Presence of the Vice President Naidu and the President of Senegal in Dakar on June 1, 2022

CENTA® Partners With The CCS Dharampal Fellowship Program To…

Complimenting Senegal for positioning itself as one of Africa’s model democracies, the Vice President said that India, as the world’s largest democracy appreciates Senegal’s success in this regard. He further said that these shared values of democracy and secularism form the basis warm and friendly relations between the two countries.

The Vice President expressed happiness over the fact that Indo-Senegalese trade saw a 37% increase to US$ 1.5 billion during last one year despite Covid-19 pandemic. He also called for diversifying our trade basket, particularly in the sectors of Agriculture, Oil & Gas, Health, Railways, Mining, Defence, green energy etc.

Thanking Senegal for becoming a member of the International Solar Alliance, the Vice President said that India looks forward to working closely with Senegal within ISA and One Sun One World One Grid (OSOWOG) initiative.

Reiterating that India is committed to being a reliable partner of Senegal in its march towards development, Shri Naidu announced that Phase II of the upgradation of Entrepreneurial Training & Development Centre (CEDT) at Dakar was approved and its implementation would commence soon. It may be noted that CEDT  was set up in Dakar in 2002 under Indian grant assistance and every year around 1000 youth, though mainly from Senegal, but many also from 19 other African countries, get trained in six different disciplines at the Centre.

Noting that Senegal, being a francophone country, is not able to avail various training/capacity building programmes under ITEC which are in English language, Shri Naidu offered a Special ITEC Course on the English training for Senegalese public servants for 20 persons at a time.

Referring to the MoU signed between Sushma Swaraj Institute of Foreign Service (SSIFS) and Senegalese Ministry of Foreign Affairs in 2021, the Vice President announced the training to a batch of 15 diplomats from Senegal at SSIFS later this year.

Recognizing that many African students come to India for higher studies, Shri Naidu called for enhanced cooperation with Senegal in implementing the E-Vidya Bharati and E-Aarogya Bharati (E-VBAB) initiative (tele-education and tele-medicine) for the larger benefit of Senegalese students.

During the talks, the Vice President also took up the issue of four Indian nationals, crew members of ship M.V. Asso-6, who are detained in Senegal since June 2021 on alleged drug trafficking charges and requested the Senegalese government to expedite their trial so that if released, they could return to their anxious families.

Appreciating Senegal’s support for India’s permanent UNSC membership, Shri Naidu reiterated India’s unwavering support to the Common African Position, enshrined in the Ezulwini Consensus and the Sirte Declaration and underscored the need to rectify the historical injustice done to the African continent.

Stressing the need for effective and reformed multilateralism, Shri Naidu called for re-energizing and re-invigorating Non-Aligned Movement (NAM) and making it more responsive to contemporary issues of relevance to the developing world. Condemning terrorism in all forms and manifestations, he sought Senegalese support for early adoption of the Comprehensive Convention on International Terrorism (CCIT) under the UN umbrella, terming it vital to combat the menace of cross-border terrorism.

During the talks, the Vice President congratulated Senegal on its assumption of the Presidency of African Union. He also congratulate the President and the people of Senegal for the victory of the ‘Lions of Teranga’ in the recent ‘Africa Cup of Nations’ football tournament and wished the Senegalese team for the FIFA tournament in Qatar.

Archaeological Science as Game-Changer: What ancient genes tell us about who we are