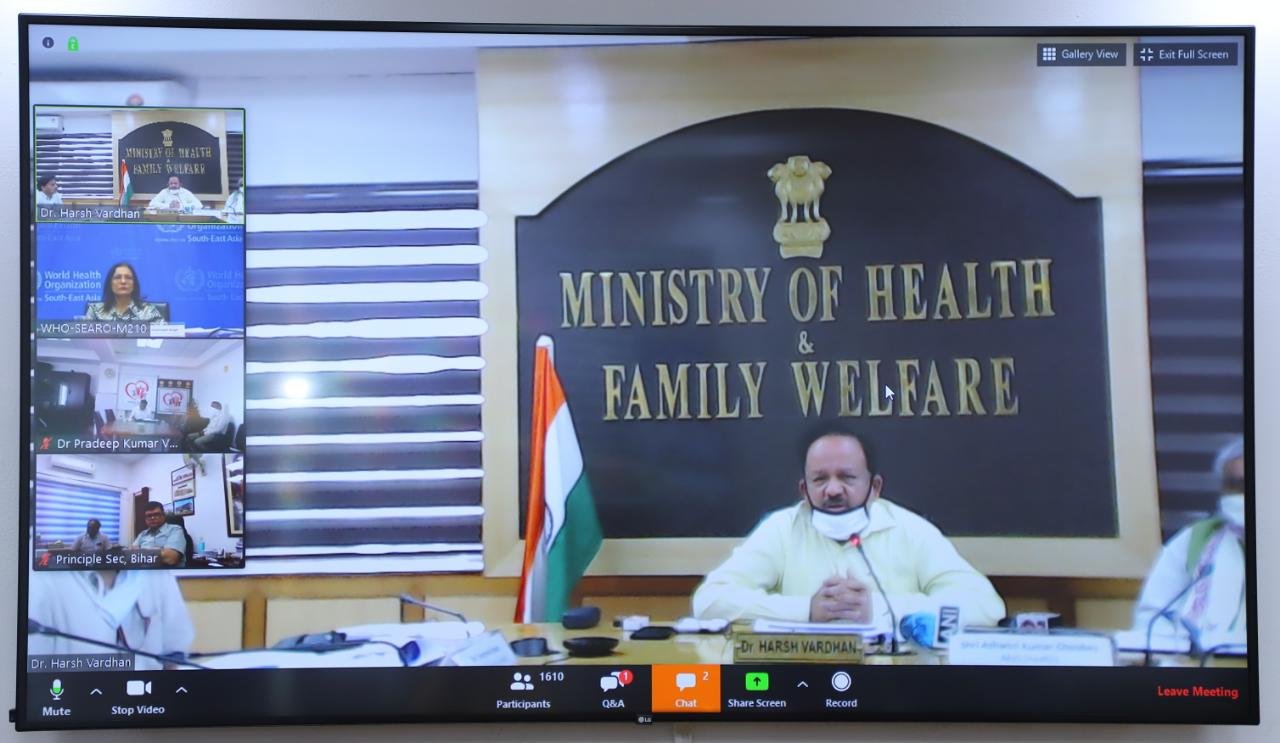 New Delhi: The Union Minister of Health & Family Welfare Dr. Harsh Vardhan held an interactive session through Video Conferencing today with senior officials and field officers of the World Health Organization (WHO) as well as key central and state government health functionaries on the measures being taken for containment of COVID-19 in India.

Exhorting the WHO officials Dr. Harsh Vardhan said “We are meeting in troubled times and we have to work together to eradicate this virus as we eradicated polio and smallpox earlier”. “We can and we will defeat this Virus”, he said. The meeting today deliberated on further strengthening the partnership and the measures that can be taken at the field level to further ramp up the response. Dr. Harsh Vardhan said, “WHO is an important partner in our fight against the COVID-19. I really value guidance and contributions made by the WHO in containing spread of COVID-19 across the country.”

Dr. Harsh Vardhan recollected, “I still remember, Doctors, be it in the government or WHO, were passionate about the cause of eradication of polio and contributed a lot for the purpose.” “Without their sincere contribution it would have taken more time to eradicate polio from South East Asia including India”, he said. He further motivated the doctors and reminded them of their potential and ability because of which India managed to come out victorious from the scourge of polio.

He reminded, “India was first to respond to COVID -19 and stands on a better footing then the rest of the world because of the valuable and sincere services of our Corona warriors.” “We know the enemy and its whereabouts. We are able to check this enemy through community surveillance, issuance of various advisories, cluster containment and dynamic strategy.”, he said. While appreciating the able leadership of the Prime Minister Shri Narendra Modi he said, “We have a great leader in our PM as he is very receptive and accommodating to the suggestions given by experts from time to time, which in turn has led to India handling the bull of COVID-19 by its horns.” Dr. Harsh Vardhan also exhorted the Corona Warriors for their never say die attitude and serving the mankind. He wished them luck for a tough fight put up by them against the dreaded Virus.

Praising India’s response to COVID-19 the Regional Director, WHO South-East Asia Region Dr Poonam Khetrapal Singh said, “Despite huge and multiple challenges, India has been demonstrating unwavering commitment in its fight against the pandemic.” The WHO Representative to India, Dr Henk Bekedam said, “Our field personnel have been redirected to support the fight against COVID-19. The same team worked tirelessly along with the government and other partner organizations to help India become polio-free. I am confident that the WHO team can once again join hands with the government to help win this fight against COVID-19.”

The key discussion points of the interaction included:

· Technical Coordination with WHO officers working at district level for helping in development of Micro Plan for hot spots and clusters containment.

· Helping in analysis of existing cases to identify the possible route of transmission.

· Helping in devising strategy for continued surveillance of districts till such time there is reliable evidence that there is no scope for further infection in the district.

The experiences and strategies from three states — Bihar, Karnataka and Maharashtra — were also presented during the meeting.

Those attending the VC were Minister of State for Health and Family Welfare Shri Ashwini Kumar Choubey, Health Secretaries and National Health Mission Directors from State Governments/Union Territories and senior officials from the Ministry of Health & Family Welfare (MoHFW), Directorate General of Health Services, National Centre for Disease Control (NCDC) and the Indian Council of Medical Research (ICMR) as well as Regional Director of the World Health Organization (WHO), South-East Asia region and other key officials from the WHO South-East Asia Region Office and experts and field personnel of WHO deployed across the country.

ABP Ganga grows dominance in one year of successful operations