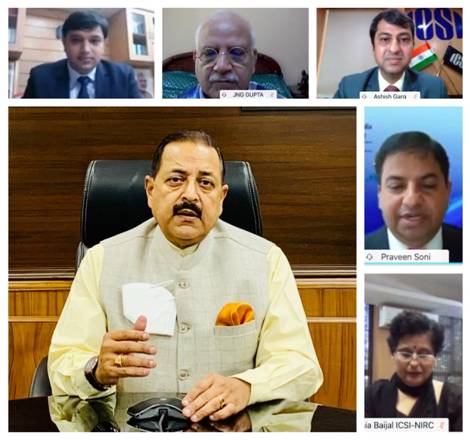 While addressing the event Union Minister, Dr Jitendra Singh said that under the able leadership of Prime Minister, Shri Narendra Modi India will emerge as the global leader in post-Covid-19 world economy. He said that the preemptive steps taken by the Indian government in enforcing earliest lock down saved many lives and further damage to the Indian economy. The lock-down period has taught us many lessons of life and this adversity has emerged as a virtue for us.

Speaking about the role of North-Eastern Region in Indian economy, Dr Jitendra Singh said that region will emerge as an alternative to the European tourist destinations post-Covid-19 as there were only few covid-19 cases found in the north- east region due to the timely lock-down in the area.

He also said that North-Eastern Region will be one of the favourite business destinations of India post COVID-19 and Bamboo is going to be the key pillar of the economic activities. Describing Bamboo as a silver lining in the dark clouds of pandemic, Dr Jitendra Singh said, it will help in shaping the economy of North East and entire country in Post COVID era. The minister said that the North East region is going to play a very vital role in reviving the Indian economy post Covid-19 and its development will work as a “New engine” to the economy.

Appreciating the role of the Company Secretaries in building and maintaining the country’s economic growth , Dr. Jitendra Singh said that such webinar will empower the students of the Institute of Company Secretaries of India ( ICSI) and will boost their moral in participating in the development of India by giving their valuable inputs in business polices. The Minister hoped that valuable contribution of the participants will help the stakeholders in transforming the Indian economy.