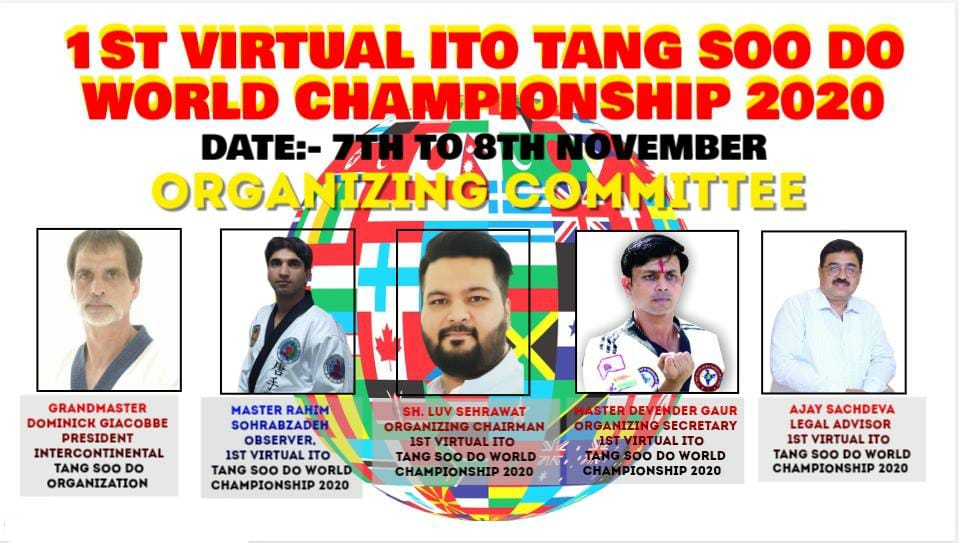 New Delhi: India won 10 gold, 6 silver, and 15 bronze medals in the first-ever Virtual ITO Tang Soo Do World Championship 2020 organized by the Tang Soo Do Sports Association, Delhi on 7th and 8th November 2020. This virtual championship came after the success of the Virtual ITO Asian Tang Soo Do Championship 2020. Students from all over the world participated in this entirely virtual event. Candidates were grouped as per their belt, and the four criteria of judgement were correctness & power of the technique, dynamics, focus & position accuracy, and commitment. The first, second, and third position holders in each category received merit and participation certificates.

12 countries including Malaysia, Morocco, Poland, Netherland, Bangladesh, Mexico, Germany, Panama, Belgium, Iran, India, and Nigeria, participated in this mega event. A total of 26 participants, 13 boys, and 13 girls took part in the championship from each country. India bagged the most winnings amongst the participating countries.

The association had appointed a representative in each participating country, who were responsible for filtering the applicants from their country and providing the shortlisted participants’ videos to the association for final judgment. The association reviewed the videos as per their judgment criteria and came out with the results for each category by the evening of November 8. Padmabhushan awardee Mahabali Satpal Singh Ji, well-known wrestling coach and former wrestler was the chief guest of the world championship while Padmashree awardee Sushil Kumar Ji, Olympic medalist was the guest of honor.

The sentiment behind the first-ever Virtual Tang Soo Do World Championship was to enforce a sense of discipline and belongingness across the world and stay united in the face to mounting adversities. Talking about the vision behind the mega event, Luv Sehrawat, Organizing Chairmen said, “An epidemic can’t stop us from practicing martial arts. We can practice martial arts while staying at our homes and be strong and capable enough to defend ourselves from the difficulties in the real world.”

Grandmaster Dominic Giacobbe, the president of ITO, USA, said about the championship, “Tang Soo Do is a discipline which helps one to empower themselves. At a time when the whole world needs discipline, we expect this world championship to instill this sentiment in the younger generation, who has the power to inspire the world.”

The Indian premiere of Duncan Macmillan’s “Lungs”, a critically acclaimed play about…