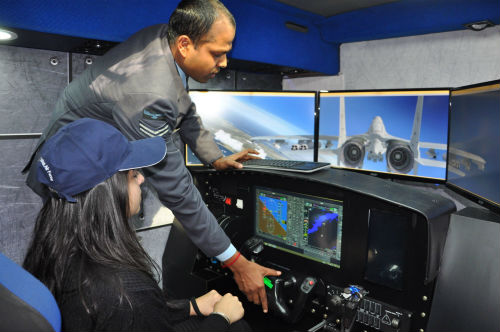 Induction Publicity Exhibition Vehicle (IPEV), developed by Indian Air Force in the year 2015, re-kindled the emotions of national fervor, patriotism and love for Nation amongst the young students who all seemed enthusiastic and eager to join IAF. The Vehicle provided hands on experience to hundreds of curious students on Flight Simulator, Glasstron, Aircraft Models, display of flying clothing and other youth oriented gadgets aimed to showcase various facets of the IAF.

Delivering an educative and motivational talk to the Management and Law students of Amity, Gp Capt M Sabharwal, Director Personnel Officers-3, Air Headquarters briefed them about the fighter operations of Air Force including “Air Defence” and “Offensive Operations”. He explained various Fighter Planes, Helicopters, Transport Aircrafts, Acrobatic Aircrafts of Indian Air Force and stressed that Indian Air Force, when needed, conducts joint operations with Indian Army, Navy and civil authorities to ensure peace in the country. He stressed that Air Force is the first to induct women in combat roles amongst the Defence Forces and in fact, IAF is the most preferred by women amongst the three armed forces because of the support system it provides. He highlighted various qualifying exams for entering into Air Force and eligibility criteria for all of them including UPSC (NDA and CDSE), AFCAT, MET, NCC and SEC. He briefed students that there are three branches of Indian Air force where they can apply as per their age, physical attributes, qualification, inclination and interests including “Flying”, “Technical” and “Ground Duties” and informed that the selection process in Air Force takes almost an year and candidates need to have patience and perseverance.

Gp Capt M Sabharwal was accompanied by Wg. Cdr. Sangeeta and 8 other Team members who motivated and encouraged the students.

The event provided a great opportunity to the students to interact directly with the IAF officers. The students were enlightened about the career in the IAF which is full of professional challenge, high degree of job satisfaction and where the quality of life is unmatched in terms of traditional ethos.

Responding to a query of a student as to how important is fitness and sound health to get into IAF, Gp Capt M Sabharwal stated that good health is paramount to bear the physical rigours of the Force and once a person joins, he/she is given adequate training to get acclimatized to the work conditions. He averred that not just the Fighter Pilots but everyone associated with IAF at any level or in any Branch are expected to maintain good health because when its war, everybody becomes a fighter.

Adwitiya Bijawargiya- a Final year student from Amity Law School, Noida expressed his great delight after watching Induction Publicity Exhibition Vehicle (IPEV) and stressed that display of equipment, simulators, uniform and other paraphernalia has added to his determination to clear Judge Advocate General (JAG) Examination and join Indian Air Force at the earliest.