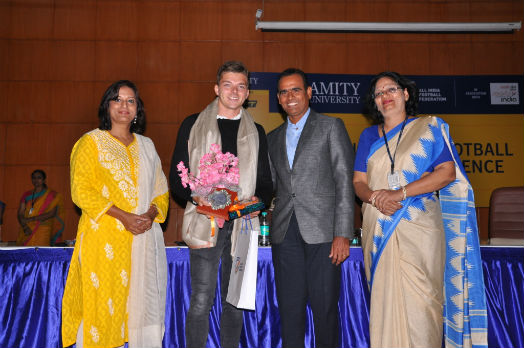 The objectives of the conference was to promote Football Coaches through Scientific Coach Education, to exchange knowledge in the field of coaching and allied areas, to enhance the flow of knowledge between the Scientists and the coach fraternity, to bridge the gap between academia and coaching through scientific publication, to disseminate knowledge about the standards, initiatives and successful Football related experiments done by various professionals and to explore opportunities to collaborate and promote knowledge and technical advancements in the sport of Football.

Addressing the gathering, Mr. Karim Bencherifa, Head Coach, Morocco National Team said that after years of experience, coaching style evolves. He further added that with time, coaches learn lots of new elements but it is important to develop your own style of coaching including tailored made straining strategy as per the team players.

Speaking about sports sciences and its application in football, Mr. Tom Joel, first Team Sports Scientist, Leicester City Football Club said that sports science is a growing concept that focuses on understanding the enhancement of human forms. He apprised that sports scientists should work with athletes to provide scientific support in preparation for competition in sync with sports coaching. He mentioned that the role of sports science department is to help reduce the sports injury occurrence, improving physical strength and overall performance of players. He further talked about the need for research to find out the reasons for injury occurrence during the games and recovering steps.

Sharing his views, Mr. Savio Maderia, Acting Technical Director, AIFF advised the Indian coaches to inculcate the knowledge, gained during the conference, in the training sessions of players. He emphasized that Indian coaching education needs to be changed and shouldn’t be monotonous. The coaches should embrace the new global coaching trends to create a world class football team.

30 Indian Maestros in the race for the Grammy’s

Eupheus Learning And Fiction Express Rekindle The Love For Reading