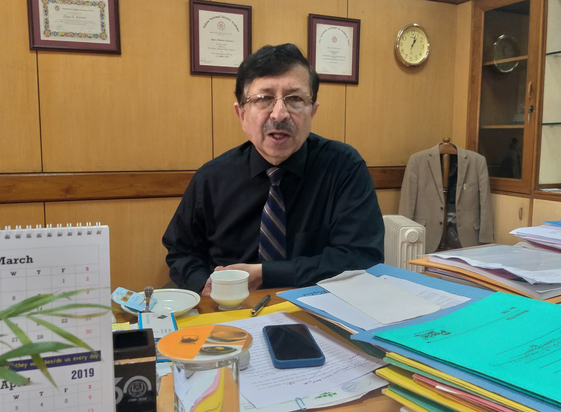 New Delhi: Indian researchers have done an extensive study on approximately 4000 SARS-CoV-2 (Coronavirus) sequences available in public databases, including strains sequenced in India While other studies are focused majorly on the genomic aspect, the study at Jamia Hamdard has evaluated both genomic as well as functional aspects of the causative virus, in the Indian and global scenario. Large-scale genomic and functional analysis revealed significant changes in some proteins. It also highlighted the conserved proteins, which can be targeted as potential diagnostic and intervention candidates.

As of today, India – the seventh-largest country, having the second largest population reported just 2% cases and 0.9% mortalities caused due to COVID-19 worldwide. While the global death average amounts to 40 deaths per million, India has seen 2 deaths per million. Investigating the possible reasons for this, researchers from Prof Hasnain’s lab (Vice-Chancellor) at Jamia Hamdard, New Delhi (India) and Dr S. Asad Rahman from BioInception Labs, Cambridge (UK) & Envirozyme Biotech, Hyderabad (India), collaborated to understand the pace of the COVID-19 pandemic in India. The group is one of the first in India to analyse such a large-scale dataset to study the evolution of (Coronavirus) SARS-CoV-2 in the country.

Open reading frames (ORF) (part of a reading frame that has the ability to be translated and has a continuous stretch of codons that begins with a start codon and ends at a stop codon) are responsible for protein production in an organism. SARS-CoV-2 has been found to have 12 ORFs. During evolution, the virus mutates (changes in the DNA) and evolves to survive. Based on mutational analysis of these ORFs, the Indian strains may broadly be divided into three subtypes. When compared with the original Wuhan isolate, the ORF1a in Indian isolates has diverged more than the global average. ORF1a is a polyprotein, which codes for non-structural proteins (nsps) playing an important role in host immune regulation.
Data collected at Hamdard suggest crucial mutations in Indian isolates, which may affect infectivity of SARS-CoV-2 in Indian population.

Indian samples fall into three groups based on their whole genome similarity. The genome-based similarity of Indian samples revealed its proximity with China, Kuwait, Spain, Norway and Canada, suggestive of exposure to COVID-19 due to travel history from these Nations into India. The initial strains arose from China, but the travel ban in early February 2020, appears to have prevented large scale spill-over directly from China to the Indian Sub-continent. However, due to unrestricted travel from other Asian regions, those strains still appear to have been transmitted indirectly from China, as they fall in the same cluster. The strains sequenced in India have the highest degree of similarity with European strains. This suggests that the delayed travel restrictions from the European hotspot regions appears to have affected not just India but many countries. The group observes that studying the evolution of the virus is critical to combatting it. The mutation patterns and the divisions of the strains (India) are vastly aligned with the global trend. Some proteins have diverged from the original Wuhan strain. Diversity of strains could be either good or bad news – the impact this mutation may have on the virulence and transmission rates is yet to be assessed.

More such studies are required to understand the pathogen’s outbreak dynamics, which will eventually lead to mitigation of the disease. The low sampling rate and a smaller number of genome submissions are identified as the major bottlenecks in the assessment of the evolution of Coronavirus (SARS-CoV-2) in India.

Envirozyme Biotech Pvt Ltd. (India): An applied Research and Development (R&D) Biotech company with cutting edge solutions to Life science and Enzyme discovery. We apply a blend of in-vitro and in-silico Data to drive and upscale our discovery engine across domains such as Agritech, Healthcare, Life Science etc.