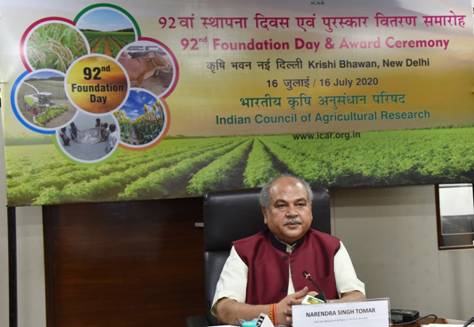 New Delhi: Indian Council of Agricultural Research (ICAR) celebrated its 92nd foundation day today. On this occasion, Union Minister of Agriculture & Farmers’ Welfare Shri Narendra Singh Tomar appreciated the efforts of the agricultural scientists due to which ICAR has contributed immensely in the progress of agriculture in the country during the last nine decades. He said that today India is surplus in foodgrains production due to the research contribution of the scientists and hard work of the farmers. He congratulated the farming community in the country for record production of crops even during the lockdown due to Covid-19 pandemic. Shri Tomar also expressed gratitude to Prime Minister Shri Narendra Modi for bringing in long-awaited agricultural reforms by announcing legal amendments and ordinances which will empower the farmers and help them in getting remunerative prices for their produce. He said that ICAR and KVK scientists also have to ensure that the benefits of contract farming reach the small farmers.

Exhorting the scientists to ensure that in its tenth decade, the Pusa Institute (IARI) gets upgraded from a national institute to an institute of international status, the Minister said that there is need to reduce dependence on imports, increase production of healthy foods and also increase production of pulses and oilseeds. Palm oil production needs to be increased by research and increased cultivation. Laying emphasis on developing new varieties of oilseeds, Shri Tomar said that the near self-sufficiency achieved in pulses production needs to be replicated for oilseeds production also so that import of edible oils is reduced.

The Indian Council of Agricultural Research (ICAR) is an autonomous organisation under the Department of Agricultural Research and Education (DARE), Ministry of Agriculture and Farmers Welfare, Government of India. It was established on 16 July 1929 as a registered society under the Societies Registration Act, 1860. The Council is the apex body for co-ordinating, guiding and managing research and education in agriculture including horticulture, fisheries and animal sciences in the entire country. With 102 ICAR institutes and 71 agricultural universities spread across the country this is one of the largest national agricultural systems in the world.

The ICAR has played a pioneering role in ushering Green Revolution and subsequent developments in agriculture in India through its research and technology development, thus making a visible impact on the national food and nutritional security. It has played a major role in promoting excellence in higher education in agriculture.

The Indian Council of Agricultural Research has been recognizing and rewarding the institutions, scientists, teachers, farmers and agricultural journalists every year. This year; nearly 160 awardees under 20 different categories have been selected. These comprise three Institutions, two AICRP, 14 KVKs, 94 Scientists, 31 farmers, 6 journalists and 10 staff members of various ICAR Institutes. It is heartening to note that of the 141 awarded persons 19 are women.

Among the Agricultural Universities and Deemed universities, Govind Ballabh Pant University of Agriculture & Technology, Pantnagar has been bestowed upon the Best Agriculture University Award for the rapid strides in all spheres of teaching, research, extension and innovations, ICAR- Central Marine Fisheries Research Institute, Cochi has been awarded the Best Institution Award among the large institute category whereas, the ICAR-Central Institute for Research on Cotton Technology, Mumbai has been adjudged the best ICAR institution among smaller ICAR Institutes category.

Six journalists comprising of 4 from Print and 2 from electronic media have been given the Chaudhary Charan Singh Award for agricultural journalism 2019.

Kendriya Vidyalaya Sangathan tops the list of Institutions with pass percentage of 99.23% in Class X Board Examination Result this year