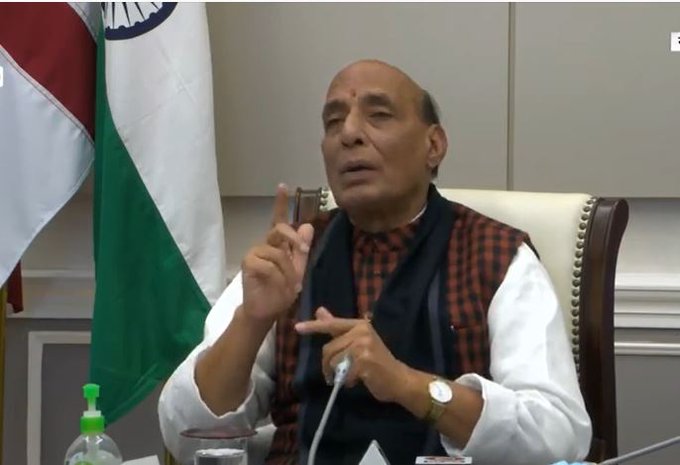 New Delhi: Mr Rajnath Singh, Minister for Defence, Govt of India today asserted that the Indian economy is likely to return to pre-COVID-19 levels by the end of the current fiscal year which is much earlier than expected. “It is the strength of our economy that India during April-August 2020 received the highest ever FDI,” he added.

Addressing the virtual Valedictory Session of ‘FICCI’s 93rd Annual Convention’, Mr Singh said that our focus on infrastructure building has not diminished and we see that it is a great multiplier in terms of employment.

Speaking on the Atmanirbhar Bharat Abhiyan, Mr Singh said, “It is a watershed moment in the history of Indian economy and the undermining of global supply chain has strengthened it further.” The defence sector would play a significant role in revival of the economy, he added.

Mr Singh also urged the industry to take the opportunity to make defence platforms not only for India but for the world. “We have opened doors for the private sector, incentivized domestic production, creating defence corridors. We are also willing to engage meaning full joint ventures and partnership with other countries. It is time that industry examines this opportunity with both pride and priority.”

He further said that as one of the largest forces of the world, India is still dependent on imports in critical areas. “We may have made some important strides in defence production, a lot more can and must be done. “Private sector can be an important stakeholder in achieving our ambitious target of Rs 1,75,000 crore of defence production and Rs 35,000 crores of defence exports,” he emphasized,” he emphasized.

Highlighting the strength of Indian companies, Mr Singh also stated that we have witnessed how different companies rose to the challenge of addressing the demand for medical equipment during COVID. The crisis has proved that India has always been futuristic and believed in finding permanent solutions. “This govt is action-driven and believes in tackling the problem heads on,” he noted.

The Defence Minister also applauded the Indian entrepreneurs who toiled hard and through innovations managed to meet the huge demands of masks, PPE Kits, Sanitizers and Ventilators during the pandemic. “India has the potential to emerge as the manufacturing hub in healthcare. We should catch the next wave of manufacturing and need to take advantage of global shift in manufacturing to Asia,” said Mr Singh.

Dr Sangita Reddy, President, FICCI said that the defence sector has seen several transformative changes towards attaining the goal of Atmarnirbhar Rasksha Utpadhan. “With this pace of positive and meaningful reform, enabling the ‘Make in India’ movement, India will soon become a net importer of Defence equipment. Indian defence sector is one of the important drivers of the engine of growth and can raise the contribution of manufacturing from 16 per cent of GDP to a target of 25 per cent by 2025.”

Mr Uday Shankar, President-Elect, FICCI delivered the vote of thanks and applauded the government’s efforts in supporting the industry during the pandemic.

Learn how to learn, and Lifelong learning are imperative for 21st-century education: Dr K Kasturirangan

University of São Paulo: USP Theater brings a show that discusses blackness in…

iednewsdesk Jan 20, 2022
THEhe noises and tensions involved in the incursions of black bodies into contemporary dance are discussed in the…

University of São Paulo: Municipal initiatives aimed at the climate…