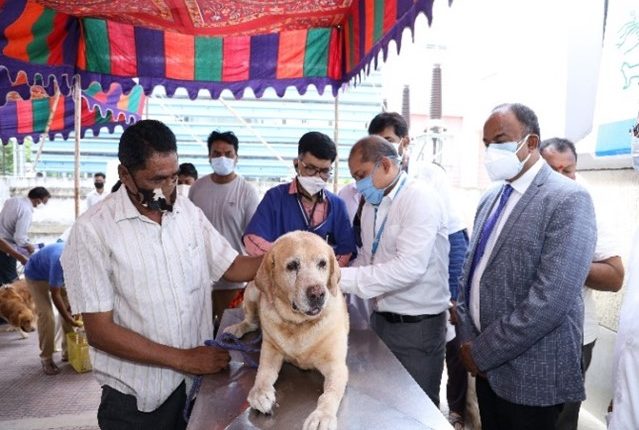 Hyderabad: Indian Immunologicals Limited (IIL), a leading vaccine manufacturer, today organized a nationwide free vaccination camp against zoonotic diseases. IIL is a “One Health” company producing world class human and animal health vaccines including vaccines for various zoonotic diseases. The 6th of July, every year is observed as “World Zoonosis Day” and many Veterinary dispensaries, NGOs and Veterinarians across the country conduct Rabies awareness camps with the help of IIL. With its commitment towards ‘One Health’ and to create awareness on many Zoonotic diseases, IIL conducted FREE vaccination camps to administer more than one lakh doses of RAKSHARAB (anti-rabies vaccine produced by IIL) in as many as 100 centres across the country through veterinary dispensaries, NGOs etc. IIL takes pride in offering this compassionate service to the society every year.

Diseases that transmit from animals to human beings are called Zoonotic diseases. 70% of all emerging diseases such as Rabies, Swine Flu, Brucellosis, Leptospirosis, Porcine Cysticercosis, Nipah, Zika, etc. that affect humans are zoonotic in nature. In India, occurrence of Rabies is prevalent and accounts for more than 90% of all zoonotic cases reported in the country. India accounts for a significant number of rabies deaths reported worldwide. The economic cost of dog mediated rabies has been estimated to be US$ 8.6 billion. The high incidence of rabies in India is due to large wandering dog population in India. There are several reasons for the high incidence including poor vaccination. Prophylaxis through vaccination is the most cost-effective intervention to reduce incidence of disease. Several countries have been able to reduce the number of rabies related human deaths through vaccination of dogs. Awareness, accurate diagnosis, improvement in sanitary conditions, prophylactic vaccination are all measures that need to be taken to restrain/eradicate spread.

Speaking on the occasion of Zoonosis Day, Dr. K. Anand Kumar, Managing Director, Indian Immunologicals Limited said, “It is the commitment of IIL as a truly One Health company to play a significant role in providing cost effective tools for the control of various zoonotic diseases in the country including the dreaded Rabies. Apart from its flagship “Anti-Rabies vaccine”, IIL has a range of vaccines for prevention of such Zoonotic diseases such as Brucellosis, Leptospirosis etc and will be rolling out human vaccines against Dengue, Chikungunya, Zika etc. The new addition in its range is the “Covid 19” vaccine which is expected to start its ­­human trials soon.”

Indian Immunologicals Limited (a subsidiary company of National Dairy Development Board) is leading biologicals manufacturer. Through research the company has delivered affordable vaccines for the consumers in India. IIL continues to be a leading manufacturer of animal rabies vaccine (Raksharab) and human rabies vaccine (Abhayrab) in the country. IIL’s CYSVAX is the world’s first vaccine for Porcine Cysticercosis in Pigs. Cysticercosis is a very important zoonotic disease and it is understood that it is a prime cause of epilepsy in humans. Vaccinating Pigs against Porcine Cysticercosis can help significantly reduce the incidence of epilepsy in humans.