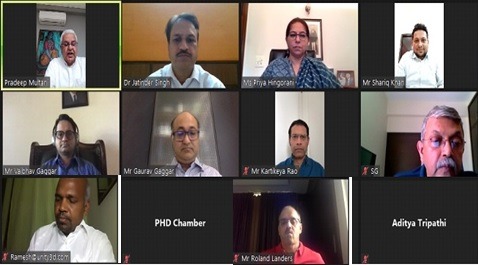 New Delhi: PHD Chamber of Commerce and Industry organized an interactive webinar on “Online Gaming The Next Big Thing In India – Current Scenario and Opportunities in Online Gaming”. The objective of organizing the webinar was to promote online gaming and gaming technologies in India and to discuss the opportunities in the online gaming sector for corporate and specifically for Startups.

Mr. Vaibhav Gaggar, Managing Partner, Gaggar & Partners, Solicitors & Advocates, who was the moderator of the discussion, gave a landscape overview that started with Casino and others, and now this industry has increased and grown at such a fast pace in the past so many years. He talked about the legal measures of gaming which needs to solidification and standardization. He emphasized Games of Skills, which are treated as a legal business according to the law which is increasing in the world of today especially in India.

Mr. Gaurav Gaggar, Chartered Accountant and Ex founder promoter Adda52.com, talking about the gaming industry where the consumption is a two-way process where one is interacting with the game and then moving with it. Further, he highlighted that the gaming industry will expand itself to other verticals which will lead to a paradigm shift in the industry which will have an immense opportunity. The market has just started and there is a long way to go for this industry.

Mr. Kartikeya Rao, CEO, WOW Chess mentioned gaming is a dynamic industry which is an opportunity. A game like Chess is so rooted in the Indian market and we are trying to elevate that experience for your players. He further discussed the technological collaborations which will increase among the industry players of gaming indsutry.

Mr. A Ramesh, Country Head, India, Unity Technologies while deliberating on the evolution of the gaming world mentioned it has a flexible factor and it connects people socially. With the right tools and the right place of legalities, there is a lot of opportunities to look at.

Mr. Roland Landers, CEO, All India Gaming Federation while talking about the future of the gaming world, said that it has grown from the last few years. It will increase over the years looking at the current trends and times. We are looking at e-sports in the coming years and there will be more trends in gaming. According to the reports, it is indicated in the gaming industry a 40% increase in time spend and transaction grew by 50%. The future of gaming combined with technology and development, there is an opportunity in cloud gaming, AI-based gaming, and others, we are an underserved industry and the opportunity we have we can go exponentially in the future times.

Mr. Shariq Khan, Category Head Gaming, XY Ads highlighted the advertising of online gaming on sites like Google or Facebook which was a challenge in the earlier times but now the situation was improved to a certain extent but there is a lot to be done.

Mr. Pradeep Multani, Vice President, PHD Chamber of Commerce and Industry in his welcome address deliberated that the increasing use of smartphones and digital technologies in India is leading people to adapt to online gaming as a passion, hobby, time pass and for some a serious profession. According to the reports, there is a revenue rise in the Indian Online Gaming Industry which will grow further in the coming years. Some of the key factors that drive the online gaming industry are millennials, internet penetration, frictionless payments and entertainment consumption patterns. Online gaming will also be pushed by the adoption of Augmented Reality and Virtual Reality. At present, the fantasy sports scene in India revolves around cricket. But, in 2020, we expect to see the growth of football, kabaddi, hockey, volleyball, baseball, and wrestling too, said Mr. Pradeep Multani.

Ms. Priya Hingorani, Co-Chairperson, Sports & Youth Affair Committee, PHD Chamber delivered conclusion remarks stating that the growth in India’s gaming industry is being fueled by enhanced connectivity, changing needs in social interaction and a growing youth population base. To regulate monetary offerings in the gaming industry, Indian laws differentiate between games of skill and games of chance. There is a strict prohibition on participation and offer of money in games of chance. However, games of skill are treated differently in that they are comparable to any other entertainment activity. She also delivered a formal vote of thanks to all the esteemed delegates and participants.

The Webinar was moderated by Mr. Vaibhav Gaggar along with Dr. Jatinder Singh, Director and was attended by Mr. Saurabh Sanyal, Secretary-General, PHD Chamber, and many senior members of PHD Chamber. The webinar received extensive participation of a diverse audience including, budding gamers, students, entrepreneurs, and many industry stalwarts, others all over the country.