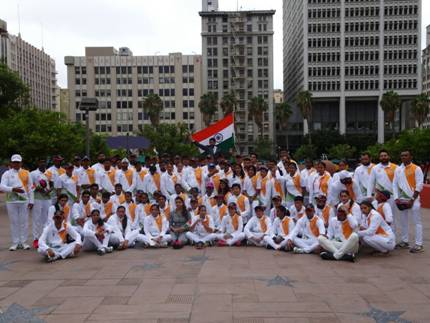 New Delhi: A 101-member Indian Police contingent has returned with a record breaking haul of 321 medals from the World Police & Fire Games held in USA earlier this month. The contingent bagged 151 Gold, 99 Silver and 71 Bronze medals in the seven events they participated in the Games held in Los Angeles, California, from August 7-16, 2017. It is a rarest of the rare occasion where each team member won a medal irrespective of individual or relay events in which they participated.

In these games, about 8,000 and more sportspersons from 68 countries from all over the world took part in about 83 events whereas Indian Police contingent participated only in seven sports events i.e. Athletics, Archery, Wrestling, Boxing, Judo, Swimming & Shooting and gave their best performance breaking earlier records. As in the past, the Government of India sanctioned an amount of Rs. 50,000/- for Gold, Rs. 45,000/- for Silver and Rs. 40,000/- for Bronze medals along with a certificate of participation in each event (Individual & Relay events).

The All India Police Sports Control Board will organize a felicitation function for the team members for their performance at the international arena. During the felicitation function of 2015 World Police & Fire Games on August 07, 2015, the Union Home Minister Shri Rajnath Singh had mentioned that the Indian Police Contingent must come back with not less than 300 medals in 2017 World Police & Fire Games and the target was achieved successfully.

École polytechnique: First laureate of the “CFM Women in quantitative…

École polytechnique: First laureate of the “CFM Women in quantitative…