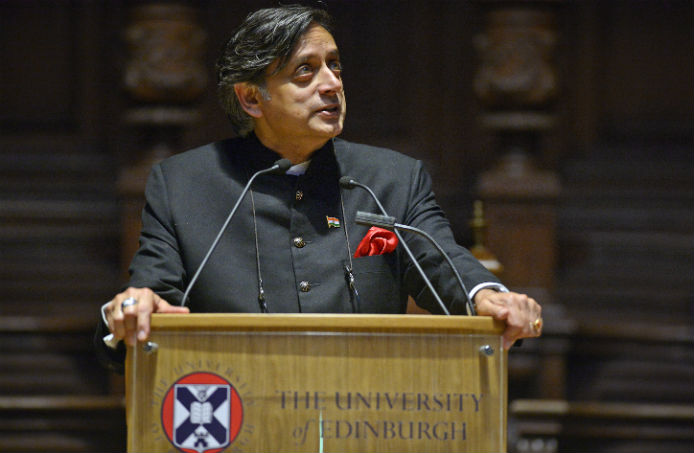 Delivering a keynote lecture as part of the University of Edinburgh’s India Day celebrations, Dr Tharoor said the two countries must learn from the lessons of the past.

The former diplomat, who is currently serving as Member of the Indian Parliament, was discussing relations between the two countries at the University’s McEwan Hall today (Monday, 2 October) – Mahatma Gandhi’s birthday.

Dr Tharoor, whose address touched upon the shaping of India-UK relations by the British Raj, said: “If you don’t know where you’ve come from, how will you appreciate where you’re going?

“It seems to me that, for every individual, we want to know a little bit about our parents and their background and their story, and maybe our grandparents as well. Similarly, a society should have a sense of at least the past couple of hundred years of what happened in its history.”

Dr Tharoor served as Under-Secretary-General at the United Nations from 1978 to 2007 and is an renowned award-winning author, having published 16 books.

He is a member of the Congress Party and Chairman of the Parliamentary Standing Committee on External Affairs for the Government of India.

He added: “I’m not asking Indians to have bitterness towards the British because of past events. Today’s Indo-British relationship is between two equal sovereign nations; two economies of roughly the same size; two countries which do not need to regard each other with a chip on their shoulders; two countries that do not need interpretation to talk to each other. India has a forgive and forget culture. My view is we should forgive, but we should not forget.”

It is the fourth successive year that the University of Edinburgh has marked India Day.

The University has been linked with India for nearly 250 years. Professor William Robertson, Edinburgh’s Principal from 1762 to 1793 and a leading figure in the Scottish Enlightenment, wrote one of the earliest European texts to focus on India.

The University’s India Institute and its India and South Asia Liaison Office in Mumbai seeks to extend the University’s relationship with India. It encourages research collaborations and academic exchanges.