“The uniqueness of this policy is that this is the first policy which has consulted the Indian Diaspora in policy formulation. It focuses on leveraging the internal strength of the country by making India self-reliant through science and technology interventions and at the same time proactively promoting international cooperation”, said Dr. Akhilesh Gupta Adviser Scientist-G & Head, SITP-2020, Secretariat, who led the consultation. 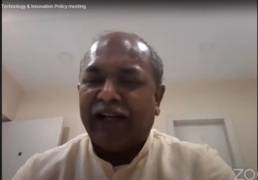 He highlighted that in the past 7 years, there has been unprecedented progress in science & technology, and the new policy captures this growth & prepares India for a brighter future.

“Inclusiveness has been a mantra for this policy formulation, and women had about 40% representation in the Thematic Groups along with a good balance of age. With around 300 rounds of consultation, participation of nearly 43000 participants, the consultation in the pre-draft stage of the policy formulation has been perhaps the one of the largest, widest, and quickest,” he added.

CASAGRAND salutes real heroes of our nation by announcing a…

The Department of Science & Technology (DST), GoI, in conjunction with Science India Forum, of Vijnana Bharti organized a virtual meeting for a detailed discussion about the second Post-draft STIP consultation with Indian diaspora from the GCC countries.

“We are in the phase where Government of India has put the entire policy draft in public domain so that people from different strata of society who are engaged with science, technology, and innovation can put forward their suggestions,” said Shri Jayant Sahasrabudhe, National Organising Secretary Vijnana Bharati who presided over the session.

He added that the session has provided opportunity to look into the salient features of the upcoming policy, and the suggestions of all stakeholders will help strengthen the policy helping us march towards the future.

Indian diaspora representatives attending the event provided suggestions on challenges to cover the Article Processing Charge (APC) in facilitating open science policy, availability of Post-doc fellowships in India, interconnectivity of state-level institutions to maintain high-quality standards, watertight compartments in definition of science, contribution of the new policy towards Industry 4.0, registration process of innovation incubators in India and so on.

The draft STIP was put together by STIP Secretariat led by Dr. Gupta with support available from the Office of Principal Scientific Adviser (PSA) to the Government of India (GoI) and the Department of Science & Technology (DST), GoI. The draft STIP was released for public consultation on 31st December 2020. Since then, a number of post-draft consultations have already been initiated to invite suggestions and recommendations. A series of consultations have been planned during next 2 weeks.

Extramarks hosts over 10,000 educators, students, and parents at the ‘EM Weekender’…